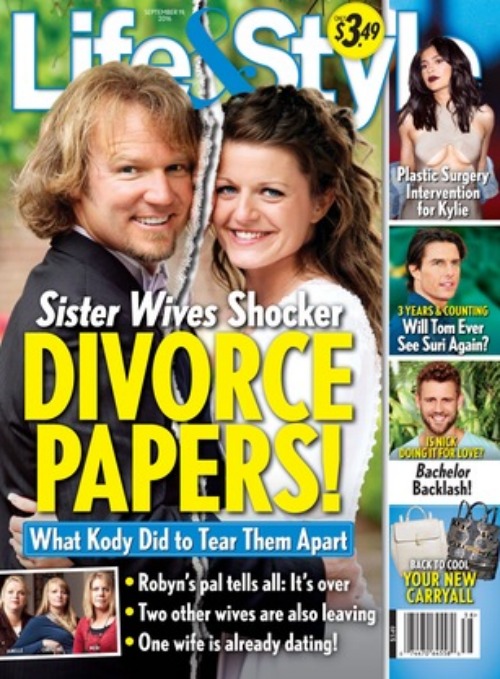 The romance Robyn Brown ‘Sister Wives’ star expected from her fairytale legal marriage Kody Brown reportedly is about to end in divorce. Not only that, two of Kody’s other wives are allegedly ready to break the family apart and Kody is already looking for two new wives.

A friend of Robyn’s, Kendra Pollard, told Life & Style that after the seventh season of ‘Sister Wives’ wrapped up filming in June that Kody was already looking for two more women to ‘marry’ and add to the Brown family. This friend of Robyn’s told the magazine that Robyn, Kody’s only legal wife, is sick and tired of Kody’s “marriage obsession.”

To add insult to injury, Robyn’s buddy says that one of the women Kody Brown has an eye on is Robyn’s step-niece, and the family’s nanny, Mindy Jessop as the fifth wife.

Not only is Robyn Brown fed up with Kody Brown, spiritual wives Christine Brown and Meri Brown are ready to walk out on the family too. Surprisingly, Janelle Brown would be the wife who would stick around despite the couple’s disagreements over finances.

Faithful viewers of ‘Sister Wives’ know that after Kody Brown divorced Meri and moved spiritual wife Robyn Brown up to legal wife number one Meri started talking online with someone who she thought was a woman named Jacquelyn “Jackie” Overton. It doesn’t surprise anyone if Meri Brown has already walked out and is dating someone.

Poor Meri did give online dating a try after her devastating divorce from Kody. It turned out Meri got catfished and the person with whom the divorcee was having an emotional affair was a man named Samuel “Sam” Cooper.

Not only did Sam catfish Meri, he kept track of his “affair” with Meri on his blog and later wrote two books, ‘Almost Meri’ed’ and ‘Almost Defame’ed.’ There was an embarrassing series of voicemails between Meri and “Jackie” that were discussed during ‘Sister Wives’ seventh season

At the rate things are going Kody Brown may end up divorced from his legal wife Robyn Brown and losing all his spiritual wives as well. If Kody’s wives turn tail and run, taking the kids with them, there might not be an eighth season of ‘Sister Wives.’

Or, there may be a season 8 and Kody’s original wives will have abandoned and Kody just may have two new wives. Maybe Robyn, Janelle, Christine and Meri, and all their children, will get their own reality show on TLC. Come back to CDL for all you ‘Sister Wives’ news, spoilers and recaps!