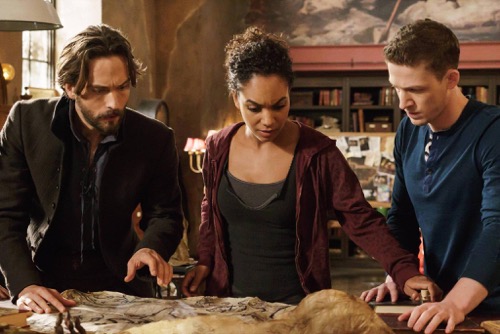 Tonight on FOX their mystery adventure drama Sleepy Hollow continues with an all new Thursday November 19, season 3 episode 9 winter premiere called “One Life,”  and we have your recap below. On tonight’s episode, Abbie’s disappearance leads Ichabod to form an unlikely alliance to save her, while Jenny faces an old adversary.

On the last episode before the Fall hiatus, Abbie’s was in trouble with Reynolds following Jenny and Joe’s encounter with Sophie. Meanwhile, the Witnesses deal with the implications of the Shard.  Did you watch the episode?  If you missed it we have a full and detailed recap, right here for you!

On tonight’s episode as per the FOX synopsis, “Following Abbie’s huge sacrifice, Crane and Jennie find themselves at a loss. In an effort to save Abbie, Crane forms and unlikely partnership and Jenny confronts a former foe. “

Tonight’s Sleepy Hollow Season 3 winter premiere is going to be exciting, and you won’t want to miss a minute of it. So be sure to tune in for our live coverage of Sleepy Hollow — tonight at 9PM EST!

Ichabod had once given Nathan Hale some advice during their days as spies against the British. He had told them that “patience and caution” would win the day.

But fast-forward to the present and Ichabod was just being reckless in his search to find Abbie. Abbie had apparently been missing for over a month and the whole team was suffering from the effects of that. So in her absence, her sister has had to step in and be the one to take care of Ichabod. Especially when he’s putting himself at risk.

Ichabod it seems had stolen an artifact from some crazy cult guys and he done so in order to connect with someone from another realm. Which is where he hoped Abbie had ended up. Though Jenny realized that Ichabod hadn’t been sleeping and that’s why she had told Ichabod to stay behind while she and Joe checked out their latest lead.

Yet Ichabod had ultimately ignored this sound piece of advice within moments after she left. So he had gone out again and had been in the exact same spot where Abbie had disappeared when he had been found by Agent Foster no less.

The FBI agent knew that Ichabod had been speaking in Ancient Greek and so she asked him what he was doing. And when Ichabod proved to be reluctant to say, well she might have mentioned that the Bureau has been interested in him since one of their own disappeared. Though she had actually used the words murder and kidnapping when she had threatened Ichabod with possibly charges.

So the agent had hoped that her constant threats over these last few weeks were finally getting to him but no such luck. He hadn’t told her why he kept going back to abandoned building and she had to return to Reynolds, again, without answers. And it doesn’t look like he’s been getting enough sleep either.

Reynolds had actually been just as frenzied as Ichabond to find Abbie but he refused to believed that Ichabond hadn’t been behind her disappearance. Therefore, Agent Foster had to tell him to go home. She said she didn’t think that Ichabond was a real threat and that she could handle things while he gets some sleep.

However, Foster had later experienced a change of heart after someone had written on her floor “Help Me Crane”.

She had thought Ichabod did it in order to frighten her but he hadn’t been him and he had a similar experience. Someone had also written on his mirror “Help Me Crane”. So Ichabod had gone over to Foster’s house to see her message for himself.

But besides the message, the two quickly realized that they had a similar mark on their arm. It was in fact a mirror image and when they put their arms together a smoky ghost had showed up. And it had uttered “help me Crane”.

So Ichabod had assumed that the ghost was Abbie and that she was sending him a messages because she was dying. And with that thought in his head, Ichabod had made Foster comply in casting a spell. One that would use the mirror as a portal and allow Ichabod to fetch Abbie from the other realm.

Although, as it turns out it hadn’t been Abbie waiting to hitch a ride. It had a demon who preys on desperation and the reason she had targeted both Ichabod and Foster was because they had been together when the first spell had been casted. The one that Ichabod had originally believed would bring his friend back.

And in the meantime, Jenny and Joe’s mission hadn’t gotten into some trouble as well. The two had a nasty run-in with Jenny’s old “friend” Randall and it had nearly resulted in Joe’s death. But fortunately Joe had managed to save both their lives and the near miss had brought them together. As in “together”, together.

And as for the demon situation. Foster had realized who was just as desperate as Ichabod to find Abbie. So teaming up they created a trap for the demon at Reynold’s place and were able to shove the demon that had catfished them back into the mirror. And Ichabod had ended up learning a lesson.

While he will never give up searching for Abbie, he knows that he could no longer risk either himself or others to look for her when there was a much bigger threat. Jenny and Joe had returned with the map they found and it showed that demons were from all over where coming to Sleepy Hollow. So right now their focus has to be on Pandora and the Hidden One.

Those two had given up on Abbie because they had found another way to get the Hidden One’s power back but with everyone focusing on the latest crisis – there is some good news. Abbie had woken up from whatever that tree did to her and now we the audience know that she’s still alive.