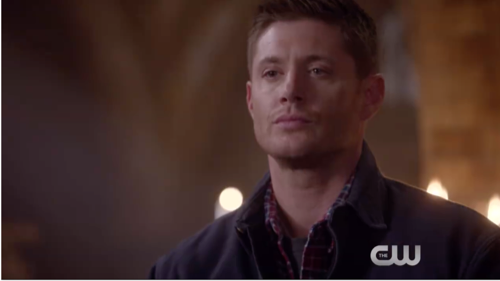 Supernatural continues tonight on the CW with an all new Wednesday May 18, season 11 episode 22 called “We Happy Few,” and we have your weekly recap below. On tonight’s episode, Sam (Jared Padalecki) and Dean (Jensen Ackles) face their biggest challenge yet.

On the last episode, Amara (guest star Emily Swallows) showed Dean (Jensen Ackles) how she’s torturing Lucifer (Misha Collins). Worried for Castiel, Dean and Sam (Jared Padalecki) came up with a plan to rescue him from Amara’s clutches. Did you watch the last episode? If you missed it, we have a full and detailed recap right here for you.

On tonight’s episode as per the CW synopsis, “Sam (Jared Padalecki) and Dean (Jensen Ackles) face their biggest challenge yet. Rowena (Ruth Connell) makes her move.”

Tonight’s season 11 episode 22 looks like it is going to be great and you won’t want to miss it, so be sure to tune in for our live coverage of CW’s Supernatural at 9:00 PM EST!

God or Chuck as he likes to be called was finding it hard to reach out to his son Lucifer. Apparently Lucifer hadn’t forgiven his father for all that’s happened since the two had their falling out and a certain someone got casted out. So Lucifer ended up telling Chuck on tonight’s episode of “Supernatural” that a spiritual band aide wasn’t going to be enough for him and that he was never going to join sides with his father until his father apologizes to him. And it seems an apology was just one thing that Chuck was hesitant about.

Chuck later explained that he couldn’t apologize for something he didn’t apologetic for. It had been his son that had become a risk to humanity and, regardless of what Lucifer said, it hadn’t been the Mark that turned Lucifer into what he was. Chuck says that Lucifer had always side-eyed humans and that the Mark had merely brought out what was already inside of him. So Chuck didn’t see the need to apologize because he hadn’t been the one that destroyed their relationship, that had been Lucifer.

Lucifer however had held himself up in his room and had refused to come out. So that’s Winchester boys decided it would be best to mediate the problem between God and Lucifer. They got Lucifer to come out of his room and they got Chuck out of the kitchen. And so all the two beings had to do was listen to what the other had to say.

But once again the two begins got into a fight. Chuck believed he was in the right and so he hadn’t wanted to acknowledge the fact he had basically hurt his son’s feelings meanwhile Sam eventually came to understand some of Lucifer’s frustrations with God because he spoke up. Sam said that Chuck shouldn’t have just said that this is my will and that no one is allowed to question it because that made Chuck sound unreasonable. And so Chuck banished the peanut gallery after that because he didn’t want to be interrupted.

Only Chuck came to see reason and he did say he was sorry to Lucifer. Who he admitted had been his favorite. So the Winchesters were able to reunite God and his son, but then came the harder part. They all had to try to figure out together how they were going to put Amara back in her box. Although Dean had wondered why they couldn’t just kill Amara and therefore Chuck had to first explain a few things to him.

Chuck said that Amara had to exist because the world had to be held in balance. There couldn’t be a light if there wasn’t darkness. So he described his situation with Amara as yin and yang. And so Amara had to be put back into a box rather than killed though Lucifer kind of brought up a point when he mentioned that Dean had had a chance at killing Amara.

Dean had her and he could have stabbed her, but the reason his weapon had failed him was because he hadn’t wanted to actually kill her. So things became awkward after Dean finally owned up to that. Yet, after Lucifer was finished toying with Dean, the guys had to come up with a plan on how to get Amara back into her cage so they figured out pretty quickly that they were going to need help.

So they split up and tried to tap into whatever resource they could find. Castiel had spoken with his brothers and sisters, Dean had visited Crowley, and Sam had paid Rowena a visit. Rowena had been trying to go back in time in order to escape the end of the world and so she hadn’t really wanted to stick around however her friend Clea changed her mind. Clea was a fellow witch that agreed to go with Rowena back in time yet she changed her mind once Sam said God was back. Clea was a deep believer and she wanted to help so she convinced Rowena to help.

And Crowley was probably the easiest person to convince. He had tried earlier to get the demons to rise up against the Darkness and in exchange he offered them places at his side. So naturally the high level demons all laughed at him because he was licking floors just the other day and still wanted to act as if he was superior to them. But Dean was able to offer Crowley the vengeance he wanted and so Crowley agreed to play lapdog.

However, the plan that was put in place had some holes. Rowena had tried to tell everyone that she thought they should act more strategic yet no one else had listened therefore everyone had to deal with the fallout. Rowena had later done her part when she lured Amara to the site, but Amara had paid her back by killing off most of the witches that had tried to help her. And then Chuck had created the biggest flaw when he tried to reason with his sister.

Chuck tried to apologize to her for imprisoning her for billions of years, but she wasn’t having it. She used the moment that he lowered his guard to attack him and Lucifer. So she killed Lucifer and she left God slowly dying because she wanted him to see the end to everything he had created.

So the beginning of the end has finally arrived.