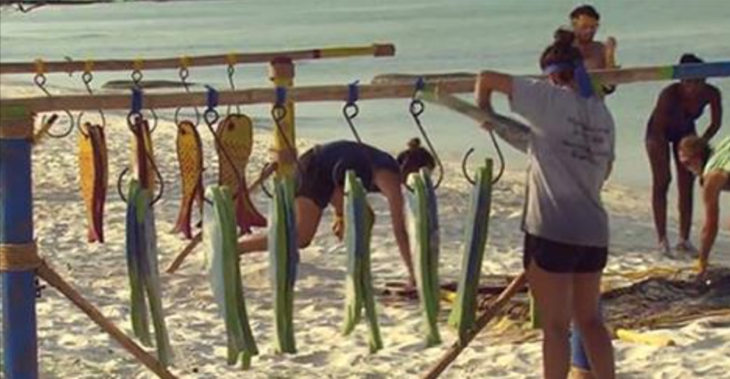 Tonight on CBS their Emmy Award-winning series Survivor Kaoh Rong airs with all new Wednesday March 16, season 32 episode 5 called, “The Devils We Know,” and we have your weekly recap below!  Tonight, the castaways drop their buffs and switch tribes.

On the last episode, the brutal heat of Kaoh Rong took a toll on several castaways, and one was medically evacuated from of the game. Did you watch the last episode? If you missed it we have a full and detailed recap, right here for you.

On tonight’s episode as per the CBS synopsis, “the castaways drop their buffs and switch things up, and one castaway feels all alone in the game following the tribe switch.”

Tonight’s season 32 episode 5 looks like they are going to be great and you won’t want to miss them, so be sure to tune in for our live coverage of CBS’s Survivor Cambodia episodes at 8:00 PM EST! While you wait for our recap hit the comments and let us know how excited you are about season 32.

#Survivor starts at Brains tribe on day 12. Joe’s finger is bothering him and it looks infected. He says he soaked it in hot water. Peter says he feels like a neutered dog after the last Tribal and checks out Joe’s finger for him.

He finds where the idol is buried in the box but sees the padlock and gets the clue that he needs to get the key and it has the tool. Now he goes looking for the tube. He’s worried he’ll get caught. He finds the cylinder on the tree. He puts the tool on a branch and gets the key.

Now Neal goes back and unlocks the box and has the idol in his hand. He’s thrilled. He also reads about the pairing twist that makes a Super Idol if you have both idols. Now Neal is determined to find another idol so he can have the Super Idol.

Jeff greets the Survivors on the beach. They see Brawn sent home Alecia at the last Tribal. He says this is the last look at Brawn. He says everybody #DropYourBuffs. Jeff says they were going to split into two tribes of seven but Caleb going out early changed things.

He says they have 13 so it’s not even. He says there are 13 buffs, six for one, six for the other and one red. The red buff goes back to Brawn beach to live alone. Jeff says they will have to fend for themselves there alone. But they won’t be part of the next immunity challenge and can’t be sent home.

Jeff says while there, you can’t make new alliances like the others will be doing. Jeff says that person will join the tribe that loses someone at the next Tribal Council. Jeff hands out the buffs. They open the buffs and we see that the red one went to Julia.

Peter is excited to be in a new tribe since he knows he was about to get axed. Scot is worried since he’s the only Brawn. He says he’s used to new situations since he played for a number of different NBA teams. They already start talking strategy.

They talk about sending a Beauty home since if they lose they will get a new Beauty since Julia would come into the tribe. Scot agrees with their suggestion since he has to play along. But he wants to keep his eyes open in case someone changes their mind.

Over at the Brains camp, they all introduce themselves. Debbie chats up Cydney and the weight lifter says she likes her motherly vibe. Debbie flatters her and says she seems really smart. Debbie tells her she wants a woman to win this.

Debbie now plans to talk to Jason about making it a foursome of Brawn and Brains. They also talk about taking out a Beauty if they are sent to Tribal since a Beauty will be coming in. Everyone in both new tribes is thinking numbers. Debbie sees herself as the mastermind.

Tai says he misses Caleb but is trying to make new friends. Scot says Tai is nice and is a hard worker and knows how to do everything. Tai and Scot go pick mangoes so he can help him reach. Scot grabs Tai’s foot and tosses him up into the tree so he can pick mangoes.

Scot says he has a man crush on Tai and thinks he’s an MVP. Anna talks to as many people as she can about Tai and says they caught him searching for an idol. She wants to put the heat on him. She tells Joe and Peter too.

Over at Chan Loh, it’s day 13 and the tribe talks about being halfway there. Jason says both sides are looking at him and Cydney like tie breaker votes. Julia is miserable over at Brawn all alone. She’s shivering and miserable and crying.

She says being out there alone is the hardest part of the game so far. She says she’s just 18 and doesn’t have a lot of experience to help her through this. She wonders what’s going on at camp without her.

Now it’s time for the #ImmunityChallenge. It’s the first for the new tribe pairings. Jeff takes the idols and says now it’s just one idol. Two tribe members must swim out and get a net of fish puzzle pieces. Two will untie the pieces and two must complete the puzzle.

Nick and Jason face off against Scot and Aubrey for the swimming leg. Jason and Nick are there first and dive down. Now Scot dives down once Aubrey is there. Scot gets one set of knots undone and goes to the other. Nick is still on the first knots.

Scott gets it done and Jason gets the second. Now they raise back to the beach. It’s about 100 pounds of weight to drag. Scot is doing it totally alone and has a lead over the other two guys. Now Scot is at the beach and is dragging the pieces with a little help from Aubrey.

Now Joe and Tai untie the puzzle pieces. Nick and Jason deliver theirs and Michelle and Cydney start untying. The fish pieces have to go on hooks. Cydney and Michelle get all theirs untied. They are hooking their fish.

Tai and Joe are catching up. Now the girls start carrying for Chan Loh but Joe and Tai are close behind hen take the lead because they’re heavy. Now it’s to the puzzle stage. Debbie and Neal vs Anna and Peter are doing the puzzles.

Anna and Peter are moving much slower than Neal and Debbie. Neal and Debbie kill them and easily win the challenge. That gives Chan Loh immunity and Gondol facing Tribal. Julia will join their tribe at the next #RewardChallenge.

Back at Gondol, Anna and Peter apologize. Tai worries he’ll be targeted but also doesn’t want to play his idol. He says he’s seen Survivors go home with an idol in their pocket. Joe and Aubrey want to send Tai out but Peter reminds them he’s the primary provider for the tribe.

Joe then tells Aubrey they could blindside Anna and says Tai helps a lot at camp. Joe advocates for sending Anna out and Aubrey agrees. Later Anna asks them what they’re talking about and Peter says they want to send a Beauty out.

Tai wants to send Peter home because he thinks he’s arrogant. Tai tells Scot and Anna he has an idol and they can send Peter out. He shows it to them. Anna says she loves blindsides. Aubrey tells Scot that Tai is safe and they want to go for Anna.

Scot mentions the Super Idol thing and says they could blindside Anna and keep the power of both idols. Scot advises Tai to save the idol since they’re going after Anna. Tai says he’s bringing the idol to Tribal and will decide there based on what comes up.

They head to #TribalCouncil. Anna and Tai get torches since they haven’t been to Tribal yet. Jeff asks Scot about being the sole Brawn. He says he feels like part of the group. Anna says she thought they would target her or Tai. Tai says he sees it the same way.

He says they’re going to keep Scot because he’s an asset in challenges. Anna says she thinks it’s 50/50 and says she’s strong. Tai says he works hard and is always working around the camp and climbing to get mangoes. He says he has skills and never complains.

Aubrey says it’s hard to hear because they’re both putting it all on the table. Joe says he thinks there is no idol twist and says there’s no clue and they’re moving along. Jeff asks if Tai thinks there are no idols. Tai says he looked and hasn’t see any.

Peter is asked if anyone was looking for cracks in Brains and Peter says they’re in a power position and he feels safe. Jeff says you can’t ever believe what you hear. He asks why wouldn’t Anna, Tai and Scot take them on tonight?

Jeff says those three could be combined. Aubrey says if you’re desperate, you might go for it. Jeff sends them to vote. Jeff tallies the votes and comes back and calls for idols. Tai thinks but doesn’t play his. The votes are: Peter, Anna, Anna, Anna, Anna.

She’s out of there! Anna’s torch is snuffed and she’s sent out. Jeff says they’ll be wondering if they made the right decision. Anna says it hurt so much and she had no idea she would be sent home. She says she knows she played hard and thought they were going for Peter but they got her instead.