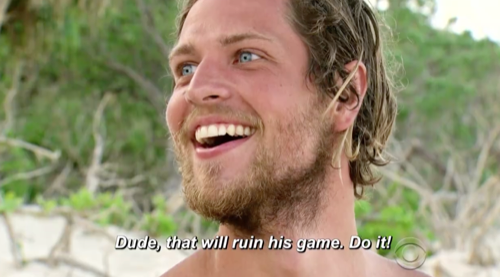 Tonight on CBS their Emmy Award-winning series Survivor: Millennials vs. Gen X airs with an all-new Wednesday, November 16, 2016, episode and we have your Survivor: Millennials vs. Gen X recap below.  On tonight’s Survivor Season 33 episode 9 called, “Still Throwin’ Punches,” a player refuses to “drop the ball” when individual immunity is on the line.

On tonight’s Survivor season 33 episode 8 episode as per the CBS synopsis, “Two castaways with secrets about each other use them as leverage in the game, while another refuses to “drop the ball” when individual immunity is on the line.”

#Survivor starts with the tribe coming back after Michelle was sent out of the game as the first juror. Chris is happy that one of the other group went out but has his eye on Adam since he’s a floater and could pose a damage.

Jay asks how it happened and Taylor gets in his ear. They are upset that the rest of the tribe trusted Adam. Taylor plans to go try and talk to Adam so he doesn’t rat him out for burying two containers of food. Adam plays nice.

Adam is pleased he wasn’t sent home and then Taylor reminds him that he knows he has an advantage. They discuss that each has a secret about the other. Later, Taylor goes to dig up the food. He’s happy that he stole half the food and no one noticed.

He’s not even halfway through his stolen food. The rest of the tribe thinks he ate the food – they have no idea that he has a stash of food buried. He still has one whole jar left to eat. Jay is worried he might be blindsided and talks to Hannah.

She tells him she didn’t want to be a goat and had to play independently. Jay gives her props. He’s lying. It’s time for the #RewardChallenge. They will split into two teams of six, go through obstacles, unlock a box and throw five bolos at a target.

Jeff says the winners go to a resort to lounge by a pool and enjoy cheeseburgers, fries, and cocktails. They do a school yard pick but then draw for captains first. Chris chose Bret, Ken, David, Sunday and Taylor. Hannah chose Adam, Will, Zeke, Jay and Jessica. Chris and Hannah are captains.

Reward battle is on!

They run the over under part of the obstacle and they all land on a mat and have to climb up to get a key. David and Adam are hoisted for each team and they have to untie knots. David gets his first. That team unlocks the box rapidly and Chris’ team takes a lead.

Adam finally gets it and the orange team tries to catch up. The purple team maintains their lead and Sunday and Taylor are throwing bolos. Taylor hooks two in a row then a third. They are two from a win. He lands four and the orange team is still stuck in the net.

Taylor throws the last one and lands it. It’s a total blowout – they destroyed Hannah’s team. Jeff congratulates Chris for choosing wisely and says they’re heading to a resort for food, drinks and fun. He sends Hannah’s team back to camp with nothing.

Taylor has been sneaking food so he’s not starving but since his stomach is stretched from the stolen food, he says he can eat more food than the others. Bret hopes to take it easy on the booze but he keeps drinking as much as he can.

Chris says Bret is letting loose and he drinks a double handful of cocktails. Sunday says the group is a strange alliance and they don’t fully trust David, Ken or Jessica. Back at camp, the others talk. Jay chats with Adam to see what will happen.

Adam says he had to work with them to save himself when Jay talks to him about it. Adam says Taylor is the reason Michelle is gone and they’re at the bottom. Jay thinks he’s being a jerk to him that he’s on the wrong side of the alliance.

Jay goes and tells Will that Adam said they’re on the bottom and next in line. Hannah hears it too and they all talk about him being an a-hole. Zeke says he wants Adam out. Zeke thinks Adam is being an idiot for saying that to Jay and making him feel bad.

The others are back at camp now and Sunday thinks there’s underlying tension between her and Jessica. She talks to Bret about it and says she thinks Jessica wants her out since she voted against her before. Sunday plans to use Jay since he’s at the bottom.

She takes Jay aside to talk about who he’d target and he says whoever she wants. She says she wants Jess out. Jay is open to that especially after Adam told him he was on the bottom of the heap.

Jeff meets them and explains the #ImmunityChallenge. He takes back the necklace from Will. Today has them balancing a ball on a wooden bow while on a slanted increasingly narrow beam. If they or the ball falls, they are out of the challenge.

Jeff offers any that want to sit it out grilled ham sandwiches, chips, beer and soda. Zeke and Will decide to sit out and eat. He lets them start eating while the other 10 assume a spot on the boards. Will says he knows he won’t win it, so he decides to eat.

He gets soda, Zeke gets a beer, and they dig into the food. The challenge starts and Hannah struggles right away and is first out. She can’t eat even though she was out almost immediately. Jeff tells Will he can’t have any beer. It’s down to nine Survivors.

The challenge gets steeper

Jeff moves them down to the next section. Sunday struggles but saves it. Wind picks up and Bret loses his and he’s out. Bret laments him not opting out so he could eat. They now have to move down to the narrower part for another 20 minutes.

Jessica, Sunday, David and Chris are out almost immediately. Jay, Adam, Taylor and Ken are the ones left. Adam wobbles and so does Jay. Adam is out. Jay goes out and then it’s Taylor vs Ken. Ken is wobbly and then Taylor goes out suddenly to give the win to Ken.

Jay is scared him or Taylor will go out unless Sunday can save them. Back at the camp, the talk turns to tribal. David wonders whether an idol will come into play and plans to split the votes between Taylor and Jay. They call Sunday over to talk and Jess and Adam too.

They tell them about the split plan and David thinks it’s safest. He says Taylor is less trustworthy of the two but they are splitting it since one might have am idol. Sunday walks over to Bret later and says she doesn’t like it and doesn’t want to write Jay’s name down.

She says they need Jess out soon. Bret agrees to talk to Jess. Sunday tells Jay that it’s him or Taylor going tonight. He’s upset. Taylor comes over and says he knows what it happening. Taylor tells Jay about his stash of food and they go eat it.

Jay still doesn’t tell Taylor that he has an idol. Jay thinks about all his options to use the immunity idol. He’s not sure whether to play it or not. Taylor tells Jay about Adam’s advantage to steal a reward. He says Adam also knows about his food bunker so he has dirt on him too.

Jay says that would ruin Adam’s game so Taylor should do it. Taylor thinks it’s no big deal if it comes out that he steals food since everyone knows. They all head to #TribalCouncil and Michelle, the only jury member so far, comes in and takes a seat.

Jay tells Jeff it’s hard to be on the bad side of things. Adam says things are hard. Jay says he’d love to write Adam’s name down again. Chris says he’s been on the wrong side too and you just have to play the game and get back in there.

Taylor says thank you then says he hid two jars of food and buried them and Adam helped me do it. Adam shakes his head no. Jay says they had three jars buried together. Adam says he didn’t help him bury it. He says he didn’t eat any of the food but watched him.

Adam says he never ate a bite. Adam says you’re defaming me when all I did was keep your secret. Taylor laughs and says he ate it all and says he ate it today with Jay because they were voting him out. He says Adam is a bigger threat because he has an advantage.

Adam says he does and tells the group that he can take a reward. Taylor says he can steal a loved one’s visit and rip it from them. Adam says it doesn’t impact the game. Taylor keeps on going. He says he told Taylor and never should have trusted him.

Adam says he didn’t steal or bury food and if the advantage is so terrible, vote me out. Jeff is stunned. David says that’s a bomb. David says this is the nail in the coffin for one of them. Taylor says if he needs to take food to get ahead, that’s what he will do.

Jay piles on to Adam

Jeff asks Jessica if this is a Millennial thing. She says Taylor is looking for a pat on the back like it’s okay. She says that’s not how any of the Gen X was raised. Jay says he’s not like that and says he was pissed at both Adam and Taylor. He throws shade at Taylor.

He says when he found out, he was shocked and says he would have told Taylor it was morally wrong if he had seen him do it. Adam says Jay ate the food with him and he says Taylor said he did and he won’t drop his morals.

Adam says he never ate the food and Jay did. Jeff calls Jay out for eating it. Hannah says there could be idols in play. Bret says who is most to blame, who’s most culpable. Jeff calls for the vote. Everyone looks stunned.

On the way out, Taylor says sorry for stealing food. Jeff says most every vote is about strategy but sometimes it’s just about consequences. Taylor says his adventure has been epic and he has a girlfriend and he hopes they’re going to buy a boat and sail around.