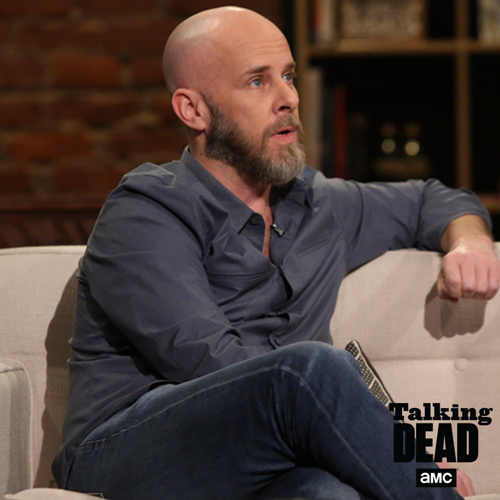 Tonight on AMC Talking Dead returns with an all-new Sunday, August 21, season 2 episode 8 and we have your weekly Talking Dead recap below. On tonight’s episode, the “Grotesque” episode of “Fear the Walking Dead” is discussed with Danay Garcia, Kim Dickens and Dave Erickson.

On the last episode Talking Dead host Chris Hardwick sat down with Mercedes Mason (Ofelia Salazar), comedian Jim Gaffigan and actress Tamera Mowry-Housley discussed the episode “Sicut Cervus.” Did you watch the last episode? If you missed it we have a full and detailed Talking Dead recap, right here for you.

Executive producer Dave Erickson, Kim Dickens (aka Madison), and Danay Garcia (aka Luciana) joined host Chris Hardwick to discuss the opener of the second half of season 2.

Dickens really likes the way that the show is using flashbacks to show what happened to her family. When talking with Chris Hardwick, she feels that Madison is more worried about Travis than Nick.

Chris talks to Danay, welcoming her as a new character to the second half of the show. She discusses the culture of the dead. Her character has good values, has a great sense of family and loves her Mexican culture.

On to the “In Memoriam,” we say goodbye to several supporting stars of the season opener:  the highway infected, struck in traffic guy, chew toys infected, Nick’s herd, and the sunglass wearing outlaw.

Cliff Curtis discusses how Nick doesn’t change his clothes because he has somewhat of a refugee survivor mentality – scared to get rid of their own belongings.

Kim enjoyed this episode. She wasn’t in it, but really likes the character and his journey. She was able to watch this episode as a fan. She feels that it is part of his journey.

Erickson talks about how Nick is on his own spiritual journey. Nick is feeling invincible.

Danay talks to Nick’s journey as well and how her character watched him walking with the dead. Luciana didn’t help Nick right away because she had to watch, to see what type of threat he is –if he is one at all.

Erickson shares that if it didn’t rain, Nick would have died.

Kim discusses her own characters changes, she isn’t  entirely sure what will happen with Madison after she killed Celia so viciously.

Kim thought that Nick’s dog scene and watching him drink pee was intense.

Erickson shared that the writers room did a lot of research on drinking pee.

Danay explains that the 2 men with her are scouts from her community.

Frank Dillan had a video message for fans, thanking them for their support for seasons to come!

Alejandro is a pharmacist who helped Nick at the end of Grotesque. We learn that he has confidence, skills and a stockpile of medication.

Erickson shares that Nick’s new community is in Tijuana, outside of a

Nick’s flashbacks of his dad’d death and the death of Gloria parallel his upcoming storyline.

Danay says that learning about Nick’s past gives her a better understanding of him.

Erickson says that Nick is feeling safe with the dead while Kim is completely freaked out by him walking with them.

Danay believes that Nick will become a leader. He uses the dead as his addiction; he acts like a kid but has great characteristics.

We see behind the scenes footage of how the stuntmen deal with the Mexican outlaw scene vs Nick’s zombie herd.

Erickson says that the book Nick was reading in his flashback was a shout out to his own dad and a reference to coming of age.

Kim is unsure of Madison will ever understand Nick’s fascination with the dead. We also learn that the outlaw couldn’t put the bullets in his gun because he was so freaked out by Nick walking with the dead.

During the sneak peek we see Nick in his new community and how they view the dead like Celia but with a bit of a twist!