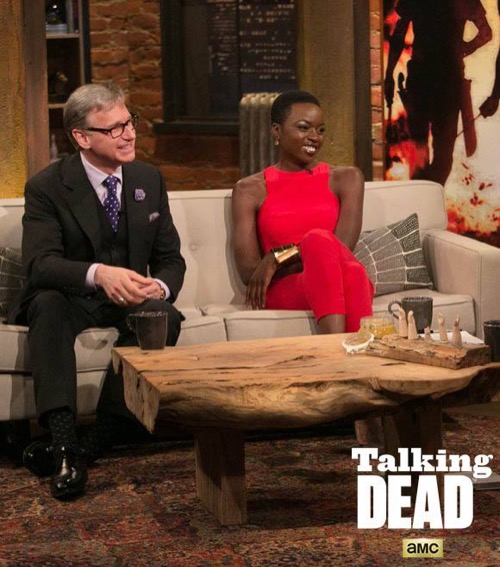 Tonight on AMC Talking Dead returns with an all new Sunday March 13, season 6 episode 13 and we have your weekly recap below. On tonight’s episode, guest talk about “The Same Boat” episode of “The Walking Dead” is discussed.

On the last episode Talking Dead host Chris Hardwick were sat down with Alanna Masterson (Tara), Ross Marquand (Aaron) and actor J.B. Smoove discuss the episode “Not Tomorrow Yet” from The Walking Dead. Hosted by Chris Hardwick. Did you watch the last episode? If you missed it, we have a full and detailed recap right here for you.

Tonight on Talking Dead as per the AMC synopsis, “Melissa McBride (Carol), a surprise cast member and director Paul Feig discuss the episode “The Same Boat” from The Walking Dead. Hosted by Chris Hardwick.”

#TalkingDead tonight has Paul Feig, director of the new Ghostbusters sequel, Melissa McBride (Carol) and Alicia Witt (dead Paula of the Saviors). Chris Hardwick tells Melissa that she was amazing tonight and asks if Carol was really breaking down.

Melissa says it was blurred and says her biggest fear is herself and what she’s capable of doing – killing. Chris says Carol hasn’t processed since they’ve been on the move. He says Carol is trending right now on Twitter. One Tweet called Carol the Heisenberg of the apocalypse.

Chris says sorry Alicia died but she says that was epic and the way to go. She’s thrilled. She says she’s a mega fan. She says Scott Gimple followed her on Twitter randomly and the DMd then the audition came up and it was a bank robbery audition and was random.

She says she got the script on the plane and she could not have wished for anything more. She says Melissa’s work ash been a revelation and she’s watched every episode. She says it’s crazy to think it’s out in the world since they shot it a while ago.

She says she hoped Melissa didn’t see it and says she’s trying so hard not to laugh as she’s dribbling it on herself. Paul Feig says he was blown away by the episode and says Melissa’s Carol is the best character on television right now.

He says he liked the lady-centric episode. He calls it a chess game of whether they would find empathy. He says it was a knockout episode. Now it’s the In Memoriam. We see slaughterhouse walkers, heeey ladies walkers, Donnie, no way out burning saviors, Primo, Molly, Chelle, and Paula.

The end note says Paula may have been a Savior but no one could save her from Maggie and Carol. Now we see behind the scenes of Lauren Cohan talking about Chelle and Paula who are like Maggie and Carol’s alter-egos.

She says working with Melissa on this episode is her Walking Dead dream come true and says it was the most inspiring experience and love that the craziness happened. She says she and Melissa stayed for those eight days of the episodes as those characters.

Melissa agrees that she and Lauren don’t get to work closely like that so much. She says she loved seeing Maggie fighting so hard and says Carol wants Maggie and her baby safe back in Alexandria. Paul says you never smoke around pregnant Maggie.

Paul says if it was him, he would have a breakdown and says Maggie letting it all out and beating Molly’s head was amazing. Chris asks Alicia about Paula killing her boss in minute one of the apocalypse. Alicia says the script was so beautifully written.

Alicia says hell yeah since she was living a horrid existence already then the apocalypse happened and her boss kept her from her family so she killed him. Feig says AMC needs a new show called Better Call Paula. Alicia says after her family died, nothing mattered.

#1 Which term for walkers is NOT used by the new group? Roamers, Growlers or Coldbloods? Roamers.

#2 What is engraved on Molls’ lighter? Clown, four leaf clover, or skull? Skull.

#3 Who was Frankie to Chelle? Her boyfriend, her son or her father? Her father.

Lauren talks about going through a Starbucks drive thru and the barista freaked out and says she loves her and she’s her favorite. She says she fangirled on her and was so cute. She says then the girl’s boss told her she was on the intercom. Lauren says that was her favorite fan encounter ever.

Chris reads a tweet that says smoking isn’t the silent killer – Maggie and Carol are. Melissa says the difference is that Paul has lost her humanity and quit counting and says Carol is still counting. Melissa says it was awesome to shoot while she was tied up and Paula was telling her story.

She says it was strange and foretelling. Alicia says it was odd and she felt that Paula was watching Carol and something was getting under her skin. Chris says maybe Paula hated that Carol still felt things when she gave up her humanity.

Now a poll – are you shocked about Carol’s crisis of conscience? Yes or No. Paul says you’d have to have one or be a monster but says it won’t stop her because she’s a strong protector and mother figure. 68% say no they are not shocked.

Chris asks about Carol and Daryl’s embrace at the end. Carol says Daryl is one of the few she can let her mask go and be vulnerable with. Melissa says Carol would find it hard to wear that mask that helps her separate tasks when Daryl is looking at her.

She says it would be hard for Daryl to see the fake Carol with the cardigan. Chris says Daryl can adjust to what he needs to do. A caller asks Melissa what does it symbolize when Carol cut her hand on the rosary? Melissa says the rosary is worth researching if you don’t know what it means.

She says the prayer alone, bless us now and in the hour of death, could be about Carol wanting faith. Melissa says the piercing the hand wasn’t intentional. Now they hear that Walking Dead is getting a permanent attraction at Universal Studios Hollywood.

Now we see some inside info on tonight’s episode. Andy Lincoln was on set even though he was only on the walkie. Only one set was used for the whole episode and it was custom built. Jeananne Goosen who played Chelle is terrified of walkers and had to talk to the extras to remind herself they were just people.

Now a fan from the audience comes up and asks Melissa what she thinks was going through Carol’s mind when she burned those people alive. Melissa says terrible things and says the smell of burning bodies has to remind her of Carol and David and her own future in hell.

Chris has for the fan some binoculars and a walkie talkie. He says maybe Rick will answer sometimes and ask for his friends back. Paul says he loved the burning Saviors and though Carol was just lighting a cigarette he thought she was having a smoke then she threw it in and it was badass.

Chris asks Alicia about the coffee story. Alicia says her favorite moment didn’t make it in. She says it was cut and she knows why they cut it. She says it was after Paula was going out in the hall and then she says she would have probably sent funny cat pictures to Carol before all this.

Chris asks what if Paula find Rick’s group instead of Negan’s and she says she think they could have turned her around because there was probably some humanity buried deep down. We see some tweets from fans next about not messing with Carol and Maggie.

We see some behind the scenes of the hallway walker fight and all the up close scenes. Jeananne calls it a rock-em sock-em show down. Maggie says they wanted kickass women fighting like men. We see Alicia getting ready to have her face ripped off and says the walker extra is going to bite her with his real teeth.

Alicia says it was so much fun to have her face eaten and says it was an amazing two weeks and the death scene was last and it was about 9 at night. She says it’s trust because they guy playing the walker was really biting and she had to trust he’d get the prosthetic and not her face.

She says the prosthetic on her neck was a whole shooting aorta so someone was behind her with a pump and two gallons of blood. She says he went for the neck and she felt the blood go into every orifice and says she was full of blood because it malfunctioned.

She says they led her off dripping blood and she couldn’t hug Melissa goodbye. Paul says he’s fascinated by Negan and read the books but then stopped. He says when Rick shot Primo after he said he was Negan and he wanted to stop them.

He also says those guys had to die for calling walkers “growlers.” Melissa is asked about her comment as Carol to Maggie that she’s meant to be something else. Melissa says Carol didn’t want her out there. She’s asked if she prefers nurturing Carol or killer Carol and she says both.

We see a look at next week’s episode with Carol smoking with Daryl and her saying he got his bike back. He lights up and she says those people in the burnt forest took his bike. She asks if he saved them and says that’s who he is. He says he should have killed them.

Paul says Daryl just validated Carol’s actions because he let them go and something bad happens. Paul is asked on Twitter where he sees them in five years. He says running a Frogurt and it’s all good. He says he just hopes they’re all alive and says they’re a badass team who can survive.

Chris says they stress him out every week doing things he knows they shouldn’t. Chris says Alicia was amazing and says it was a wonderful way to go. Chris says Melissa brings strength and grace to her performances and says she’s a joy to watch.