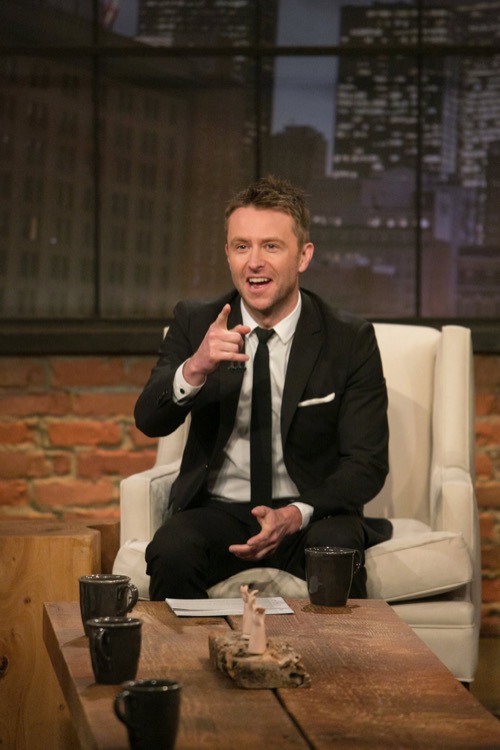 Tonight on AMC Talking Dead returns with an all new Sunday May 1, season 2 episode 4 and we have your weekly recap below. On tonight’s episode, guests talk about “Blood in the Streets” episode of “Fear The Walking Dead.”

On the last episode Talking Dead host Chris Hardwick sat down with Lorenzo James Henrie (Chris Manawa), a surprise cast member and professional wrestler Chris Jericho discussed the episode “Ouroboros” from Fear the Walking Dead. Hosted by Chris Hardwick. Did you watch the last episode? If you missed it we have a full and detailed recap, right here for you.

Tonight on Talking Dead as per the AMC synopsis, “Colman Domingo (Victor Strand) and actress/superfan Yvette Nicole Brown discuss the episode “Blood in the Streets” from Fear the Walking Dead. Hosted by Chris Hardwick.”

#TalkingDead tonight has Colman Domingo (aka Strand) and super fan Yvette Nicole Brown are the guests tonight with Chris Hardwick. Colman talks about how Strand is a great character and Chris talks about Colman’s impressive stage experiences.

Chris mentions the boat named Abigail being a man not a woman since it’s Thomas’ last name. Chris says it was beautiful and added more complexity to Strand’s backstory. Yvette says she loves the strip mall preacher stuff then says she partied with Colman before.

She says she saw him at a charity event and says he’s so cool. She talks about Colman being there with one button too many undone and his chest hair out. Yvette says she has a separate notebook for Fear. She says she thought Strand robbed Thomas opportunistically.

She says she likes that they cast people with charisma and you didn’t know if Strand was bad or good til Reed got on the boat and was an ass. Yvette says she has a soft spot for Strand. Chris says he’s a survivor and that’s why he’s so well equipped for this.

Colman says Strand didn’t get emotional and was practical. She says Strand wasn’t nervous when Thomas came for him months later. Chris says he wondered about Thomas’ and Strand’s relationship and couldn’t tell if Strand loves Thomas or if it’s just an opportunity.

Colman says Strand is a man of his word. He says he has a different moral compass and values obligation. Now we see the In Memoriam. There’s Red and Ben the pirates. The tent infected. We then see some behind the scenes on the boat.

They talk about the boat now being a prison instead of a refuge once it’s invaded. Chris reads some fan reactions about Strand and Abigail being the apocalypse power couple #Strandigail. Then others say Strand is an opportunist but love this relationship.

Colman says he thinks Strand didn’t tell the others about Baja House because he wasn’t sure if they could handle it. Yvette says she thought Strand fled because these people have turned his boat upside down and she thought it was about time.

Chris says he thinks the pirate group has a connection but Yvette says she think it was Alex that Strand cut loose since she knew everyone’s name. The crowd applauds that. Chris says Yvette is smarter than more intuitive than anyone else on this stuff.

Colman says Strand went to get his gun but Daniel took the clip so he couldn’t fight so he had to go. Chris says when Madison helped him onto the raft it was the first time he was weak. Then Chris brings up Madison messing with the pregnant chick.

Colman says Madison has some Strand tendencies. Chris says fans are asking what happens with babies and would a zombie child eat your way out. A caller asks Yvette if she ships Abigail and Strand. Yvette says she can ship Dougray with a potted plant and loved him since Ever After.

She says Thomas has a softness when it comes to Strand and has been very easy with him since the get go when he stole the credit cards. Now the quiz.

#1 What is the name of the girl Chris was seeing – Maria, Selena or Serena? Ander is Maria Santos.

#2 When Tom Abigail catches Strand he tells him I – you. Is it obliged, obliterated or obligated? Obligated.

We see more behind the scenes with Mercedes Mason talking about Ofelia helping pregnant Vida. She says Griselda, her mom was sweet and Ofelia got that but needs to get more like Daniel to survive this world but is still pure and wants to help.

Chris talks about how this episode has Dead Calm undertones. He asks Yvette how she would have dealt with this and she says she remains hood ready and they would never have gotten on the boat. She says Madison took her all into the ship and says what’s that about.

Yvette says she’s been in Cleveland and someone comes to the door it’s like who are you and what you want – she says that’s no zombie apocalypse needed. Colman says Strand is like this is why we have rules about people coming on board.

Colman says he likes that Madison saved Strand and they are much alike. He says Strand will argue you down but appreciates better ideas and says they can bond but will fight. Chris says Madison went dark fast and he’d like to know her backstory.

Chris says he still thinks her maiden or last name might be Grimes or Dixon. Yvette says that would be great. Now a poll – Do you blame Alicia for the invasion because she was radio Tindering? Yvette says it’s totally her fault. 90% says yes.

Yvette says she thinks she’s like Carol and who will morph into who she needs to be and hopes she’s playing him. Chris says she’s playing him and he might die at her hand at some point. A caller asks Colman what can he tell them about the helicopter Nick saw.

Colman says they’re at the border of Mexico and there’s a flotilla not letting people in and Yvette says show that to Trump. Mercedes Mason talks about Ofelia’s gunshot wound and says she put a thumbtack under her bandage to make her cringe and they asked her to stop.

Now more behind the scenes of Frank Dillane in the tent city. He says it was like a haunted festival. Kim Dickens aka Madison did her stunts in this episode except the head smash into the mirror. The neighborhood Nick walked through also had search and rescue symbols on the garage doors.

Now we see an interview with Nick Dillane on his bloody walk. He says Nick likes to go and do stuff and did this for Strand because it’s boring being on the boat all day and it’s a lot of nonsense and squabbling on the boat.

Now a fan from the audience comes up and asks Colman if he finds himself acting like Strand in real life. He says yes when he was at JFK at the airport and a woman inched up to try and cut him in line and he said – what are you doing, cut it out. He says she stopped dead.

Then Chris brings her out a bag of clothes like Nick had and a bathrobe like Strand wore. Yvette says Nick is a cute kid and she couldn’t tell when he came to shore if he was running from something or to something then jokes about checking him out.

Yvette says she wrote in her notebook that Nick will never be clean. She says he sees something about the dead infected always hungry and sees himself in there. She says when he’s covered in viscera he checks them out. She says he likes to be dirty.

Yvette then jokes and says she likes a dirty boy. Chris says she can teach a class on this. Colman says Nick is obligated to Strand the same way Strand is obligated to Thomas. He says it’s beyond love and friendship. He says Strand cared about Nick’s safety on the mission but Nick was more capable.

Chris says the world wrapped around Nick since his world was already like that. A fan says Strand is starting a Ricktatorship and Colman says Strand wants control but there are all these people challenging him.

Yvette says she thinks Strand’s emotions are to get to Thomas and with Nick it’s obligation and he’s just trying to get on with this and didn’t know they’d have all these people. Yvette says she doesn’t know why the others don’t get this that you don’t let anyone on the boat.

Alycia Debnam-Carey (aka Alicia) talks about the hostage scene. Jesse McCartney (aka Reed) talks about getting stabbed with a crowbar. Cliff Curtis (aka Travis) says Jesse got him a couple times and left some marks on his necks.

Yvette says she hates apocalypse people and says Chris will flip out. There was a poll that asks if you like Strand better now that you know his back story and 85% said yes. Colman talks about the swim test and how bad they all did. He says they all failed.

Chris says these shows condition people to shoot everyone. Colman says once Strand took those people on he has no regrets even if Daniel is giving him side eye since he’s useful. Chris says when Strand lost the phone and the raft was sinking, he had some regrets.

He says he thinks if Strand died, it would be stepping on a rusty nail and not a blaze of glory. Chris reads a Facebook question to Yvette about Madison’s past and she says her switch flipped fast. Colman says Strand’s words are his best weapons but he’ll have to pick up a machete soon.

There’s a poll question of what is the best thing the group could run into on the high seas? Battleship, Love Boat or Rick Grimes on a raft? 83% vote Rick on a raft. Chris says a fan asked what if Madison is Andrea’s sister.

We see a sneak of next week of Daniel interrogating Reed who says Connor will come for him. Daniel hurts him and Reed says you’ll be sorry. The spike is still sticking out of him. Reed says his brother is the nice one. Chris sits there too. Reed tells him he’ll take Ofelia apart. Daniel glares.

Yvette says that guy is about to die and Chris mentions that’s pop sensation Jesse McCartney. Colman says he thinks Strand fears love the most since he grew up without his mother. He says that makes his values about obligation not love because it means more.