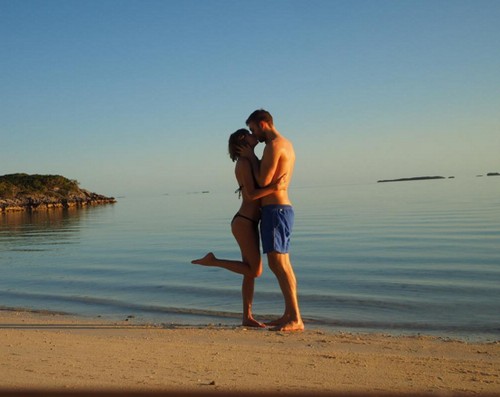 Taylor Swift and Calvin Harris are still going strong as evidenced by T-Swift’s bikini-clad Instagram photos and video from her beach vacation. The couple recently enjoyed a fun, PDA-filled vacation after they celebrated their anniversary.

Taylor took to Instagram on Tuesday and shared photos of their trip. Taylor Swift also posted a video of her bikini-clad self jumping on an inflatable trampoline in the middle of the ocean.

“That time when we finally took a vacation. @calvinharris,” she captioned the video. Swift can be heard talking to Harris in the clip. 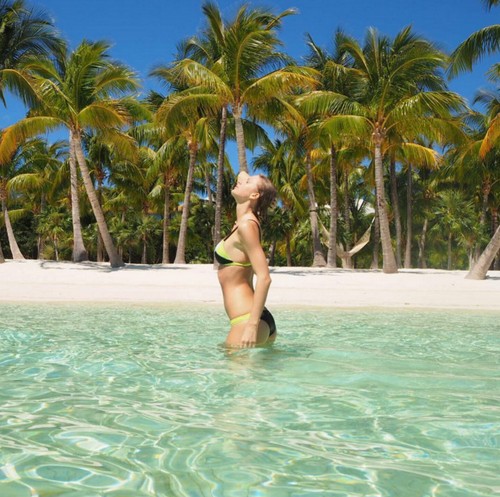 Taylor Swift and Calvin Harris also shared a rare snap of themselves kissing on the beach. The pop star captioned the photo with a simple red heart emoji. Another picture showed TS + AW written on the sand. It stands for Taylor Swift and Adam Wiles which, according to Us Weekly, is the DJ’s real name.

Meanwhile, Calvin Harris gave fans glimpses of their vacation on Snapchat. The DJ posted a series of snaps of them on a swan floatie as they admired the sunset. No Kanye West to cloud a perfect day!

Earlier this month, Taylor Swift and Calvin Harris celebrated their anniversary. The “Out of the Woods” singer uploaded a photo of an engraved locket from her boyfriend. “3.6.15 One year down!” Swift captioned the photo.

The publication officially confirmed that the couple was dating last Apr. 2015 after they were spotted talking to each other at the 2015 Brit Awards. A few days later, they were seen together in Nashville and the pop star also flew to Las Vegas to watch the DJ perform.

Last January, it was reported that Taylor Swift and Calvin Harris may be planning to move in together. There were speculations that they are ready to take the next step in their relationship. Moreover, it may follow a proposal from the DJ. How romantic!

However, there’s still no official confirmation on whether the couple will be tying the knot any time soon. Let them relish their anniversary first. Hopefully, we will get to see more of Taylor Swift and Calvin Harris as they grow in their relationship.

That time when we finally took a vacation. @calvinharris