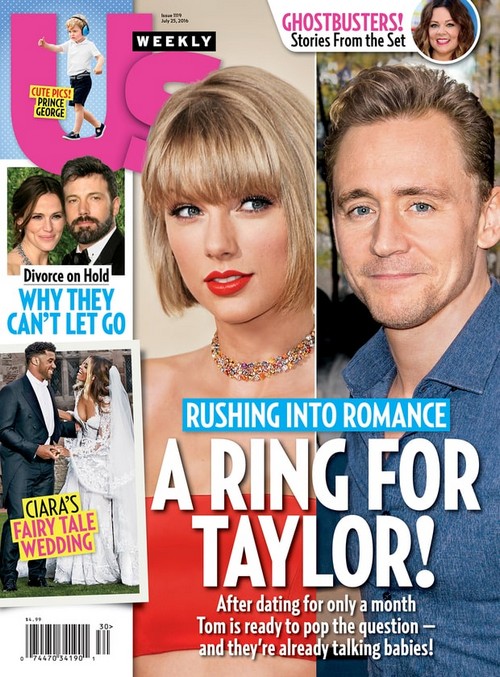 After running through seven boyfriends in nine years Taylor Swift may have found THE ONE in Tom Hiddleston. There’s buzz out there that Tom plans to propose to Taylor very, very soon. Are Taylor and Tom on the fast-track to the altar?

A source told Us Weekly that Tom Hiddleston is all set to propose in the very near future. And of course Taylor’s going to say yes! Taylor Swift has a history of not-so-long-term relationships so Tom may not want to spend too much money on the engagement ring.

Tom and Taylor have been together just about a month – the ‘Night Manager’ actor and ‘Shake it Off’ singer hooked up just days after Taylor dumped Calvin Harris. The lovebirds have already been to Italy, Australia, England, Nashville, and Rhode Island. And both have met each other’s parents.

The couple was absolutely inseparable over the Fourth of July weekend. Taylor and Tom hung out with some Taylor’s squad including Blake Lively and Ryan Reynolds. Tom wore a sleeveless T-shirt that had ‘I Heart (with a heart symbol) Taylor’. In addition Tom had a temporary heart tattoo on his shoulder with the letter ‘T’ smack dab in the middle.

This source went on to say that this is Taylor’s dream come true. “[Tom’s] romantic, classic and chivalrous, and he’s doing everything right.”

Everything right except pumping the brakes a little bit on this relationship. Has Tom taken a look at Taylor’s list of ex-boyfriends? Joe Jonas in 2008 for 3 months. Taylor Lautner and Taylor Swift dated from August 2009 until October 2009.

Things were barely over with the ‘Twilight’ star before Taylor Swift started dating John Mayer in November 2009. Taylor and John split in February 2010. Do you see the pattern here yet Tom Hiddleston?

Taylor stayed single from February until October 2010 and then hooked up with Jake Gyllenhaal for about 2 months. Taylor took a bit more time off between relationships and then started dating Conor Kennedy in July 2012 and by October 2012 Conor and Taylor were no more.

Harry Styles was next up on the Taylor boyfriend list. If you blinked you missed that less that one month long hook up.

Then came Calvin Harris and everyone thought this was it for Taylor, she had finally met the man of her dreams and was going to take a walk down the aisle.

Nope, after about 15 months together Taylor Swift dropped Calvin like a hot potato and had a brand new, sparkly English boyfriend named Tom Hiddleston.