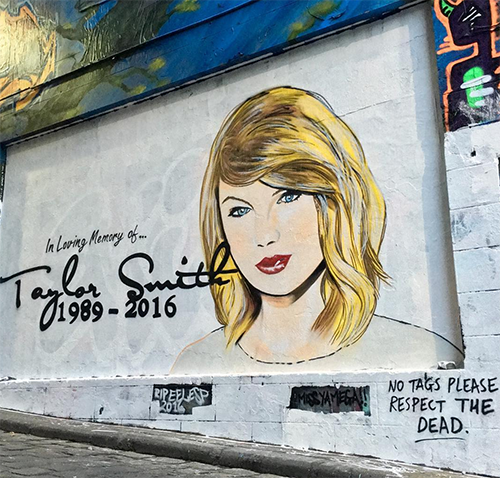 Taylor Swift is furious with the Australian artist Lush Sux because of an ‘RIP Taylor Smith’ mural that bears a striking resemblance to the ‘Bad Blood’ singer. Before legal proceedings could even get started the mural was defaced.

Before the defacing took place – not once, but twice since the mural went up – Lush told the New York Daily News that he had no intentions of taking down the Taylor Smith mural. Lush claims he has received several threats from Taylor’s inner circle.

Lush posted a video of the mural on his IG account showing the mural on which is written, “In Loving Memory of Taylor Smith 1989-2016.” Elton John’s ‘Candle in the Wind’ is playing in the background. Lush ends the video with “Good night, Sweet Princess” followed by “rest in peace Harambe, 5/28/2016.” In case you forgot, Harambe is the silverback gorilla who was shot and killed at the Cincinnati Zoo after a child fell into the gorilla exhibit.

Not long after the video went up on Lush’s IG account, he posted, “Taylor Smith’s attorney has emailed me with a thread of legal action if I do not remove my wall relating to her.” No one is certain if this really did happen.

The next IG post from Lush Sux showed the first defacement of the mural. Someone painted over the incredible likeness to Taylor Swift and changed it to a duck face (which also resembles a Spongebob Squarepants face that appeared in one of the cartoons). The mural read, “In Loving Memory of…Harambe 1988-2016.” Lush wrote, “WHO DID THIS!?!”

If things weren’t interesting enough the second defacement is Kanye West’s face painted under a mop of blonde hair. “In loving memory of Haramye the Savage 2016. Murdered Taylor Smith on Snapchat.” Lush Sux wrote on Instagram, “WHO DID THIS PLEASE STOP PLAYING WITH MY WORK.”

This is an obvious reference to the ongoing war between Kanye West and Taylor Swift over a Snapchat recording Kim Kardashian released to prove Taylor lied about not knowing Kanye was including lyrics about the singer in his song ‘Famous.’

After Kim Kardashian and Kanye West exposed the fact that Taylor knew exactly what Kanye was including in the song, everyone realized what a phony and fake America’s Sweetheart really is. Maybe it’s time for Taylor’s new boyfriend, Tom Hiddleston, to cut his losses and run for the hills before Taylor destroys his career. 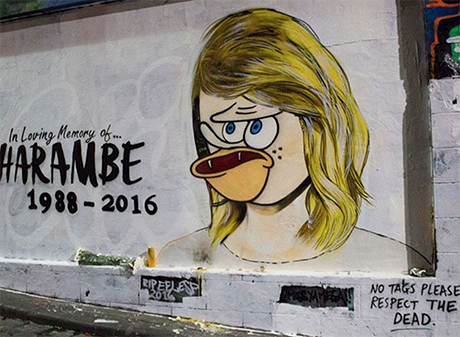