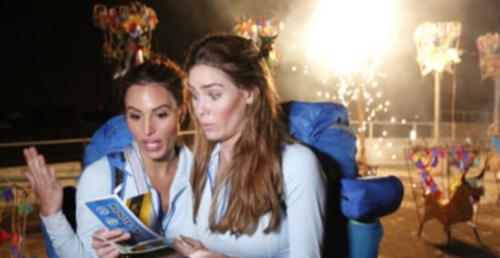 Tonight on CBS the Emmy award winning show The Amazing Race hosted by Phil Keoghan returns in an all new Friday March 11, season 28 episode 5 called Get in “We’re Only Doing Freaky Stuff Today.” and we have your recap below. On tonight’s episode, the race continues in Chamonix, France, where teams climb 15,000 feet in the French Alps.

On the last episode, the race continued in Geneva, Switzerland, where a romance blossoms between two racers. Later, teams got caught in one of the largest-ever footraces to the mat for first place. Did you watch the last episode? If you missed it we have you covered with a full and detailed recap right here for you.

On tonight’s episode as per the CBS synopsis, “the Race reaches new heights as teams climb 15,000 feet in the French Alps, and one team may be in jeopardy of elimination after dropping their clue down a mountain.”

#AmazingRace starts in cold weather in Chamonix, France and the teams are given some warmer gear to wear. Brodie and Kurt leave first and must search for a specific car license plate and drive to a local gondola outpost. Tyler and Korey leave in second.

The two pairs of guys race off and both find their cars. Dana and Matt leave third. Burnie and Ashley leave in fourth. Brodie and Kurt are first to the clue box near Mont Blanc. They have to go up 11000 feet in a gondola to get their next clue up high on the mountain.

Tyler and Korey show up right behind them. They choose a cute guy. They head out with mountain gear, bread and a guide. The first gondola has the first two teams on it. Sheri and Cole are in fifth. Zach and Rachel are in sixth and Scott and Blair in seventh. Erin and Joslyn are in last.

Sheri and Cole have to get off the gondola because they forgot to get a guide. The first two teams make it up the mountain. They head up steep stairs and see the clues are hanging off carabiners. They have to dangle on lines to get the clues.

Kurt and Korey are the two going to grab them. Kurt gets it first then Korey. Phil is there. Next is the Detour which is the choice of Dynamite where they take bread and explosives to avalanche teams. The other is Campsite where they pitch tents.

Brodie and Kurt go for dynamite and so do Korey and Tyler. Ashley and Matt go grab the clues for their teams. Matt gets their clue but Ashley is close behind. Ashley drops their clue! Ashley now has to go back and retrieve another clue. She goes fast to try and make up time.

Burnie and Ashley decide to do the campsite challenge since no other teams are and they set up tents all the time. Scott and Blair and Zach and Rachel are on the gondola. Zach doesn’t like heights at all. Kurt and Brodie argue as they traverse the mountaintop.

Dana starts having a panic attack with the thin air and has a panic attack. Tyler and Korey are nervous on the climb across the mountain. Tyler is freaking out. At the other #Detour, Burnie and Ashley work on the tent and have to stake down the tent then build a snow wall around it.

Brodie and Kurt deliver the bread and dynamite and get the clue. They watch a controlled explosion and are floored. They now have to head to the gondola station again. Tyler and Korey make it to the station and hand off bread and dynamite.

Dana and Matt are now on the climb. Zach and Scott are going after the clues on the lines. Zach and Rachel decide on dynamite and Scott and Sheri and Cole head up. Sheri doesn’t like the height. Cole can’t do it so Sheri is doing it but is crying and terrified.

Joslyn is doing it for her team and she’s fearless. Sheri wants to do dynamite but Cole is scared to go even higher. Burnie and Ashley are struggling with the tent then find out they need to dig more. Matt and Dana make it to the top of the mountain to hand off the explosives and bread.

That puts them in third place. Zach and Rachel are now on the climb and the view gets Zach past his fear of heights. Scott and Blair grab their dynamite and head out. Blair yells out to Erin and Joslyn not to forget lunch. She was kidding but they go and take someone’s lunch.

Brodie and Kurt have to now drive to another gondola station and for the #Roadblock, there’s high altitude paragliding. They will launch from 7000 feet with a guide and have to answer questions about what they see.

Erin and Joslyn are still wandering around looking for lunch. They realize they just wasted time. Korey does the paragliding for his team and Brodie for the other. Erin and Joslyn are on the mountain heading up. Cole is freaking but Sheri says that will be faster.

Brodie is at the Roadblock and says this is what the Amazing Race is all about. Brodie wades into thigh deep snow then grabs the GoPro and they take off. Kurt watches from down below. They get mired in snow and the sail falls.

Now Brodie has to wait while Korey gets a chance and takes off. That puts him into first place. Brodie is frustrated. He spots a Yeti with a French flag and is excited to be in first. Brodie then gets to try again and they take off.

Burnie and Ashley are told not enough snow and they have to pack more. Erin and Joslyn get their clue at the mountain to while Sheri and Cole work their way up. He’s really afraid. Korey circles for the landing and Kurt thinks it’s Brodie.

When they touch down, he’s stunned that Korey is ahead of them. They get their clue and take over first place. They now have to go to a statue of the first man to summit Mont Blanc to check in with Phil at the pit stop.

Brodie lands and Kurt asks how Korey got past him. They’re frustrated. Ashley and Burnie add more snow and get their clue but they’re way back in 7th now. Sheri and Cole finally make it up the mountain to get a clue that puts them in last place.

The last two teams now wait for the gondola. Tyler and Korey check in at 1st place and are thrilled. They win a trip to the Philippines at a treehouse villa. Brodie and Kurt check in at 2nd place. Brodie says they deserved the win.

Matt is thrilled with the view as he paraglides. He says this is why they came on the Amazing Race. Rachel takes off for her team and they skid down on their faces. Dana and Matt check in at 3rd place. Sheri is paragliding for her team and the last three teams are lined up.

They’re waiting for wind and anyone who falls will have a problem. Ashley runs and falls. Fail. Erin is nervous and Sheri waits too. Sheri and her guy try to launch. They take off! She’s so thrilled. Erin tries next and they fall. Ashley tries again and gets stuck too.