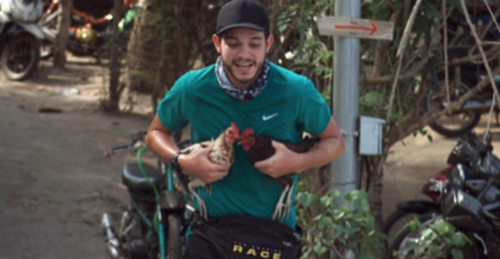 Tonight on CBS the Emmy award winning show The Amazing Race hosted by Phil Keoghan returns in an all new Friday April 29 season 28 episode 10 called “Monkey Dance!,” and we have your recap below. On tonight’s episode, the racers visit Lembongan Island, Indonesia.

In the last episode, in a tight race to the mat, teams rowed and swam to the Pit Stop located on a boat, where the losers walked the plank and were eliminated. Did you watch the last episode? If you missed it we have you covered with a full and detailed recap right here for you.

On tonight’s episode as per the CBS synopsis, “the racers visit Lembongan Island, Indonesia, where they face a double U-turn and a gut-wrenching, 40-foot plunge.”

#AmazingRace starts with the teams sleeping on the boat that was the check point. They wake and Tyler and Korey leave first of the five teams. They have to go to Bali to look for clue boxes under the water and find out there’s a u-turn.

They talk about u-turning Brodie and Kurt since they were already last. Burnie and Ashley leave in second place. Sheri and Cole leave third. Dana and Matt leave in fourth. Brodie and Kurt leave last and are worried about being u-turned.

Tyler and Korey see the buoy and have to dive down to it. Korey goes down first then Tyler. They get the clue box and head back to the boat. Burnie and Ashley show up not too much later. The clue says go to the bottom of Pura Puseh stairway and find the dancing monkey.

They take the last clue from the one clue box. The others will have to find another box. Sheri and Cole dive down as Burnie and Ashley take off. Cole doesn’t see a clue because he doesn’t know what he’s looking for. Cole grabs a clue finally once he figures out what it is.

Dana and Matt are in the water and Brodie and Kurt are close behind. Matt grabs a clue and is confused. Brodie and Kurt overtake them because of Matt’s confusion. Tyler and Korey are just ahead of Burnie and Ashley. They find taxis and hop on board.

Matt finally figures out they have the clue and they read it. Dana says they did it right but then doubted themselves. Sheri and Cole touch down off their boat and hop on the taxi. Brodie and Kurt are next. Tyler and Korey get a sarong tied onto them before they can go onto the stairway.

They head up the stairs where there are local dancers and musicians. They find the dancing monkey who has clues. They get the #Detour of Haul or Harvest. In Harvest, they have to go out in a canoe and harvest enough sea weed and lay it out to dry.

The alternate is Haul and they have to deliver 50 coconuts and four chickens to the other side of a rickety bridge. Tyler and Korey decide to go for Haul. Burnie and Ashley get their clue from the monkey who runs from them and they decide on Haul also.

Dana and Matt are last to get on the taxi to head to the stairway. They run across the bouncing bridge. They each head out with their first load. Sheri and Cole get their clue from the monkey and Brodie and Kurt are just moments behind.

They all decide to do haul. Tyler and Korey deliver two chickens and four coconuts. Burnie and Ashley have two and five. Dana and Matt are last to the monkey and also decide Haul. Sheri chases down chickens and they head out. Brodie and Kurt decide to do the chickens first so each grab two.

Burnie and Ashley do one extra and head out to the next stop.

Tyler and Korey make it to the paddleboard shop and get the clue for the #Roadblock. Tyler has to do it. There’s a four story leap off a cliff into a lagoon. Brodie and Kurt find out they got u-turned and see what Burnie and Ashley did to. They have to turn back and do Harvest.

Sheri and Cole need four more coconuts and are tired. Dana and Matt are at 3 and 33. Brodie and Kurt get into their boat and pole out to the seaweed harvesting channel. Sheri and Cole deliver their last coconut and get the clue and head out.

Dana and Matt need one chicken and seven coconuts. Brodie and Kurt head back with lots of seaweed. They get stuck on the boat and fill their baskets. They bring them to the tarp and dump them out to spread.

Dana and Matt are almost done then lose a couple of coconuts. They’re done finally and head out. Dana and Matt worry about being in last place. They see the u-turn and found out they’re okay so far. They grab the clue and head off.

Sheri and Cole get the road block and Cole has to do it but he’s scared of heights. At the roadblock, Tyler and Korey see a guy up top ready to jump. Korey is jealous that Tyler gets to do it. Yu have to climb up a ladder that’s vertical.

Ashley is diving and Korey thanks Burnie for u-turning them. Tyler has to do stretches with the guy he thinks is hot. Brodie and Kurt finish Harvest and head out after getting a lovely face mask. They grab their clue but are in last place.

Matt decides to do the roadblock for them. Brodie is annoyed that Tyler and Korey –turned them. Tyler is up top and sees Ashley pulling up. He jumps and says the fall was fine but landing was rough. Tyler and Korey are happy to find out the pit stop is next.

It’s at Bajra Sandhi monument. They head off. Brodie decides to do the road block. Ashley is ready to make the jump and is scared. She does it and went a bit sideways. Burnie cheers her on. They head out in 2nd place.

The others wonder if Cole will stand up their scared and mess up the u-turn plan. Dana and Matt are close behind them. Cole is on the cliff and is nervous but he jumps and everyone is happy. His mom is so happy.

Brodie talks about going to LA to see Blair for a date #Blodie.