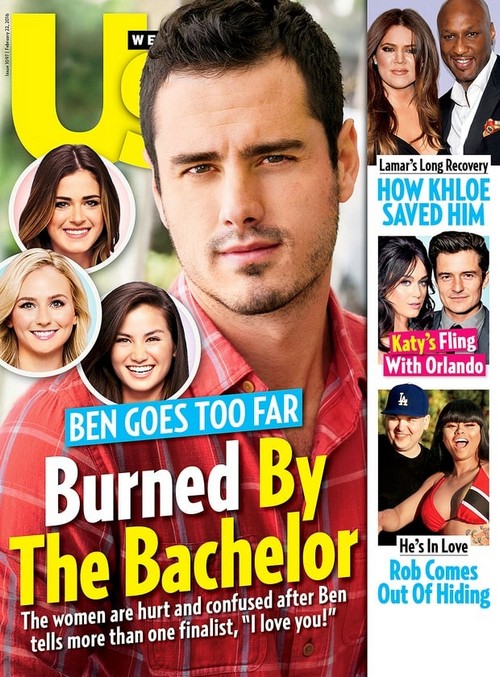 The Bachelor 2016 spoilers tease that fans will not want to miss Ben Higgins’ shocking and dramatic final rose ceremony of Season 20. When this season of The Bachelor kicked off – Ben Higgins was a saint, and dubbed the “most perfect Bachelor ever.”

But, it turns out he did a huge NO-NO, and broke the unwritten Bachelor rule – and told TWO women that he loved them. Obviously, after both women heard Ben Higgins profess his love to them, they both were certain they were getting a wedding proposal, but one of them was sent home confused, heartbroken, and dumped.

This week’s cover of US Weekly Magazine features a photo of Season 20 Bachelor Ben Higgins – and the final three women: Caila Quinn, JoJo Fletcher, and Lauren Bushnell. The headline screams, “Ben Goes Too Far – Burned By The Bachelor.” The cover goes on to say, “The women are hurt and confused after Ben tells more than one finalist ‘I Love You.’”

It really is funny that literally overnight Ben Higgins went from the sweetest man on reality TV, to a cold-blooded heart-breaker. Ben is constantly being compared to previous Bachelors. Juan Pablo and Chris Soules may have been total tools, but even they didn’t tell a woman they were in love with her and then dump her on national television and propose to someone else.

According to US Weekly Magazine, the runner-up who was sent home without a Neil Lane engagement ring after the final rose ceremony did not take the break-up well. Seriously, who could blame her? After dumping her, Ben tried to smooth things over with the Season 20 loser – but it was no use, she was crushed.

A source dished to US Weekly, “Ben told her that he truly does love her. He said those weren’t just words. That was the most important thing he had to do: Tell her that as much of a mistake as it had been to say ‘I love you,’ he did mean it. His words were cold comfort to the jilted woman. She was devastated. There were lots of tears.”

So, do you think that Ben Higgins might not be the most perfect Bachelor after all? Did he cross a line? Or should the women have all braced themselves a little better for something like this – after all they did sign on to a show where they were sharing one man with two dozen women? Let us know what you think in the comments below and get your Bachelor fix here!