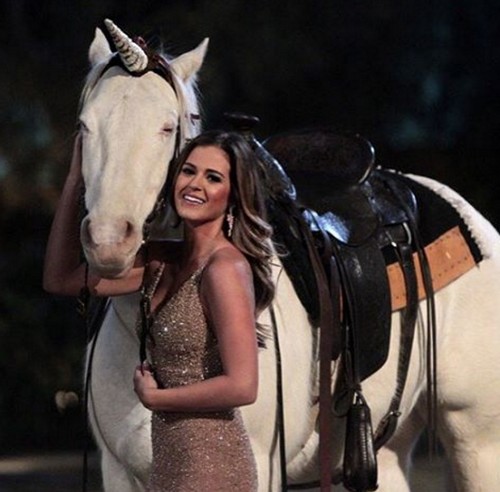 Is Bachelorette 2016 star Jojo Fletcher a gold-digger? Season 12 spoilers tease that love might not be the only thing that Ben Higgins’ ex is searching for, apparently she is on the hunt for a big payout as well and is hoping to land herself a husband with a hefty savings account.

Jojo Fletcher is only into the third week of The Bachelorette on ABC, but according to a new report, she may be pulling the wool over the producers and the guys vying for her attention’s eyes. An inside source dished to In Touch Magazine that Jojo Fletcher could care less about finding love, she’s looking for a man that can support her.

A source who claims to know Jojo well dished to the tabloid, “JoJo has no interest in pursuing anything with the guys who didn’t have good jobs or a ton of money.” The insider added, “Her goal in life is to have nice things and live an easy life. When it comes to finding a husband, the only thing she cares about is money,” the source explained. “She’s a gold digger.”

Apparently, Jojo eliminated several guys from the show once she realized they weren’t sitting on nest egg or from a wealthy family. In Touch’s snitch explained that Jojo would blame it on a “lack of chemistry,” but really it was because they didn’t meet her financial criteria.

Ironically, Jojo’s frontrunner this season is Jordan Rodgers, former football player and the little brother of NFL MVP Aaron Rodgers. The funny thing is, Jojo obviously was attracted to him because of his famous family and ties to the NFL.

Little does she know, Jordan is feuding with his family and not even on speaking terms with Aaron Rodgers. It looks like her plan may have backfired!

What do you think Bachelorette fans? Do you believe that Jojo Fletcher is a gold-digger? Share your thoughts in the comments below and don’t forget to check CDL for all of your Bachelorette 2016 spoilers and news.

Give me a few more practice throws and I swear I’ll nail it… Thank you for such a fun experience! @dodgers ⚾️