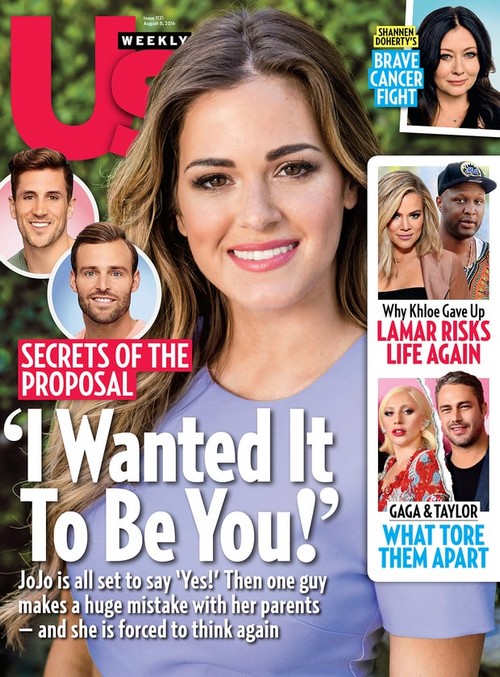 This week’s cover of US Weekly features a photo of Bachelorette Jojo Fletcher and her two runner-ups, Robby Hayes and Jordan Rodgers. The headline teases, “Secrets Of The Proposal: Jojo Is All Set To Say ‘Yes!’ Then One Guy Makes A Huge Mistake And She Is Forced To Think Again.”

According to The Bachelorette 2016 spoilers, the guy making the huge mistake is none other than frontrunner Jordan Rodgers. Apparently, Jordan Rodgers’ time with Jojo’s parents does not go well, and Jojo’s mother Soraya advises Jojo to go with Robby Hayes and not the NFL retiree.

An insider dished to US Weekly, “Suitor No. 1 arrived at the Fletchers’ hotel suite with flowers for Soraya and gag gifts for everyone else. He was, perhaps, just a little too smooth. After he left Soraya said she thought he was a player.” Interesting, is there anyone that has met Jordan Rodgers that doesn’t think he is a player, other than Jojo of course? Talk about red flags!

US Weekly goes on to reveal that of course Robby Hayes was the perfect gentleman, and Jojo’s family was impressed with him and could tell that he genuinely cared for The Bachelorette. Robby did one thing that Jordan Rodgers did not, he asked her parents for their permission to propose to their daughter.

The magazine goes to reveal that not asking for Jojo’s parents permission to marry her was a deal breaker, and Jojo sobbed to Jordan that it was “disrespectful.”

So, is there a chance that Reality Steve’s spoilers were wrong all along and Robby Hayes is actually the Season 12 winner? Or could it be that ABC is just trying to drum up some drama to make the Season 12 finale of The Bachelorette a little more interesting? Let us know what you think in the comments below and come back to CDL for all your Bachelorette news and views!