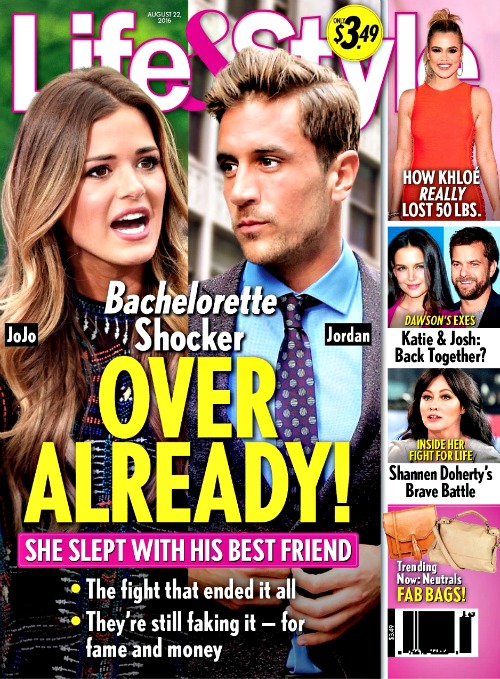 Sources close to the couple told the magazine that the two have been fighting ever since their engagement and its appears that the celebrity couple has had enough.  An insider stated that “JoJo has accepted that she hasn’t found her Prince Charming in Jordan.  She’s told him that he was a complete disappointment and that she regrets ever giving him her heart.”

However, JoJo and Jordan are planning on keeping up their charade of pre-marital bliss in order to continue riding the waves of fame and money that have resulted from being on the hit TV show.  “They’ve agreed to stay together for at least a year and transform their relationship into a business deal.  Endorsement deals are already coming their way, and JoJo and Jordan are going to milk them while they can.”

The split comes as no surprise to fans of The Bachelorette 2016 who have kept up with the perpetual media storm and endless speculation surrounding the couple. Jordan Rodgers’s strained relationship with his brother and Green Bay Packers quarterback Aaron Rodgers and his girlfriend actress Olivia Munn undoubtedly played a role in the couple’s breakup.

Neither Aaron Rodgers nor his girlfriend supported Jordan Rodgers’s decision to appear on the hit TV show and news of Jordan’s engagement to JoJo only served to further drive a wedge between the brothers.  In addition to the family feuding, the internet has been awash with rumors that Jordan Rodgers was only on the show for fame.

Jordan recently addressed these rumors in an interview with People magazine stating “I definitely wasn’t on the show for fame.  My goal every step of the way was to be open and honest with JoJo and to fall in love.”  In addition to fame-seeking allegations, both have been accused of cheating: the cover of Life & Style proclaims that JoJo slept with Jordan’s best friend, while Jordan’s past infidelity has been famously addressed on the show.

Whatever the reason behind the split, it’s clear that the two will continue to play the happy couple in order to try to squeeze every last dime out of their scandal-riddled romance.

Do you think JoJo Fletcher and Jordan Rodgers were faking their relationship all along?  Did one or both of the stars cheat?  Let us know what you think! Come back to CDL for all your news on The Bachelorette!