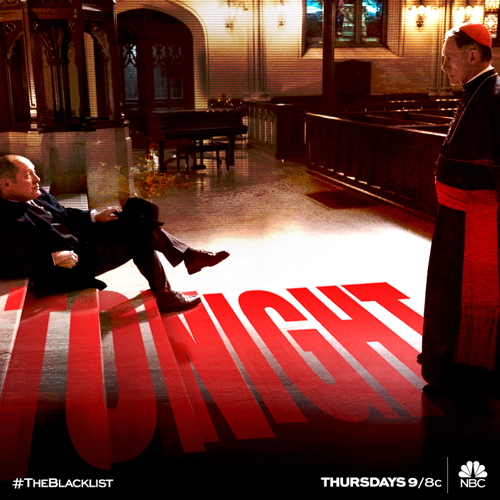 Tonight on NBC their criminal drama, The Blacklist starring James Spader continues with an all new Thursday January 28, season 3 episode 12 called, “The Vehm.” On tonight’s episode, a rare medieval device is used in a murder, prompting Red (James Spader) to warn the task force that a lethal vigilante group from the Middle Ages is now in operation.

On the last episode Red (James Spader) worked with the task force to infiltrate an assembly of high-level criminals. Did you watch the last episode? If you missed it, we have a full and detailed recap right here for you.

On tonight’s episode as per the NBC’s synopsis, “a rare medieval device is used in a murder, prompting Red to warn the task force that a lethal vigilante group from the Middle Ages is now in operation. Meanwhile, Liz receives startling news and cautiously plans her next move.”

Tonight’s episode of The Blacklist kicks off with a clown leaving a kids’ birthday party – the mother pays him and he hops in his car and drives off. A van pulls up behind him and men dressed in black jump out with guns and begin smashing in his windows. They drag the clown kicking and screaming and toss him in the back of the van. They take their hostage to some sort of basement and men in white hoods begin performing some sort of twisted ritual and dumping hot wax on him and lighting him on fire.

At Elizabeth’s apartment she is making a list of pros and cons to having a baby – Tom arrives with breakfast, he announces that he got a job teaching history to high-school students in Boston, he wants her to move there with him. Tom has no idea that Elizabeth is pregnant, he really wants her to start over fresh with him and their dog. Elizabeth rushes out and doesn’t give him an answer – she says she has somewhere to be. After Elizabeth leaves, Tom finds her list about the baby.

At the FBI office, Red is briefing the team. The clown was found dead under the bridge – his name is William Dow. Dow’s murder matches the murder of an old friend of Red’s named Weston. Dow was found sprinkled with melted lead just like Weston. Elizabeth arrives late and Red protests – he wants her to go home and rest. She refuses, so he continues on. He says the murderers are a vigilante group called the “Holy Vehm,” and they originated in the medieval times in Europe. The Vehm was started to punish people for sinning.

Red thinks that the Vehm has been resurrected. Elizabeth heads in her office to try and track down a manufacturer of the lead. Red follows her in to her office and gives her a loaded gun to protect herself, since Ressler took her’s. Elizabeth announces that she is pregnant – Red laughs that he has known for weeks. She reveals that she still hasn’t told Tom, and he is thinking about moving to Boston. Red reminds her that their work is not done, and the addition of a child is only going to make it more difficult.

Samar heads to William Dow’s house to speak to his wife – she insists that her husband didn’t have any enemies and he was a great father to their daughter Amy. Ressler thinks that something is up, he tells Samar to track down Amy and see if she will tell them anything. They learn that Amy no longer speaks to her parents and has changed her name to Lisa Neil.

Meanwhile, one of the members of the Vehm is stalking their next target – he has a folder on Dr. Myers and is following him up and down the street. He calls the Doctor’s office and sets up an appointment and says that it is for his son. He arrives at the office and announces that his name is Mr. Harris, but his wife wouldn’t let him bring his son to therapy. Mr. Harris paces around the office and asks Dr. Myers if he usually sees the children unsupervised during therapist sessions. The rest of the Vehm arrive at Myer’s office and they perform another ritual and murder him by dumping melting lead down his throat.

Samar tracks down Amy/Lisa Neil – and learns that her father was a child molester. Amy tells Samar that one day she caught her father in the basement and he was raping a little boy. She tried to tell people what happened but no one believed her. Lisa tells Samar that whoever killed her father did the world a favor because he was a monster.

Elizabeth returns home from work and Tom is waiting for her – he is thrilled that they are having a baby. Liz tells him not to get too excited, she thinks she is going to give the baby up for adoption. Tom is appalled by the idea, he tells her that they can move to Boston and leave behind Red and all of the death that follows him and start over fresh with their baby and have a normal life. Liz is skeptical, but promises to think about it.

Red is sitting in a dark room with a beaten man and holding him at gun point – Red begins rambling about how when he was littled he “romanticized about killing bad guys.” Meanwhile, the guy shakes and Is clearly scared to death. Red reveals that he is the man that beat Elizabeth up in the parking lot and left her for dead – then he shoots and kills Elizabeth’s assaulter. Liz calls Red’s phone and has no idea that he is in the middle of killing the man that attacked her. She tells Red that they have a lead – they think the Vehm is hunting down and killing pedophiles. Red reminds her that the Vehm’s first victim was his friend Weston – Weston was not a good guy – but he was certainly not a pedophile, Liz’s theory isn’t jiving.

Aram gets some information on the lead that was used and they track it from the store to the buyer – St. James Church. Ressler and Samar rush to the church and it appears empty, they check out the basement and stumble upon the Vehm murdering another man in one of their sacrifices. A battles ensues – Ressler and Samar wind up killing three of the Vehm, and arresting one and bringing him in to custody.

At the FBI office they run fingerprints on the one member of the Vehm that is still alive and learn that his name is Harlan Holt – he served 7 years in prison for sexually assaulting a minor and was given early release because he agreed to be castrated. Meanwhile in the morgue, they discover that the three dead Vehm also were castrated, and it looks like they did it to themselves. So it looks like the Vehm is former pedophiles…hunting down pedophiles.

Elizabeth and Ressler question Harlan – he describes in detail every child that was assaulted by the men that they killed. Harlan hands over all of the police case files that they have on the pedophiles. Elizabeth isn’t buying it, she tells Ressler that she thinks someone is giving the Vehm names of fake pedophiles to handle their own agenda.

Red is two steps ahead of Liz, he visits an old associate named Greg – who is now living under a bridge and on the run. Red accuses Gregory of giving the Vehm names of men he wanted killed. Gregory insists that he isn’t controlling the Vehm, Red pulls a gun on Greg and demands he gives him a name.

Elizabeth goes through the case files that the Vehm has – and learns that most of them are fake. She heads back to Harlan’s cell and tells him that someone is manipulating him, Harlan says he can’t “betray the trust” and tell her who gave him the case files. He does tell Ressler that the next man that the Vehm is killing is named James Wagner – Ressler rushes out to find Wagner before the Vehm does.

Meanwhile, Red heads to the St. james church – Gregory told him that the person running the Vehm is actually the preacher at the church, Cardinal Richards. Red confronts the preacher, he knows that he used to work for the Vatican bank. He corrects Red and tells him that he rooted out the corruption of the bank, Red laughs that he didn’t take out the corruption, he just took over it. The preacher begins rambling about the Vehm making “sacrifices for the holy church. Red laughs, the men he had killed were his money-laundering competition, not pedophiles. Red says he has a proposition for him – he tells the preacher that he will protect him if he disappears now – but the Cardinal has to do something for him.

Ressler arries at a high-school and is looking for Wagner – his assistant says that he stepped out to smoke a cigarette and doesn’t have his phone on him. Ressler rushes down the hallway of the school and finds Wagner, the Vehm attacked him and then stopped in mid assault and just left. Ressler arrests Wagner and tells him that he knows that he is either a moneylaunderer or a pedophile.

Liz and Samar arrive at Cardinal Richards’ office – but they are too late. Red tells them that he had the Cardinal “taken care of.” Apparently, he sticked the Vehm on the Cardinal and revealed that he was using them to take care of his own money laundering agenda.

Liz heads to a salon to get her hair dyed back to her natural hair color. While she is there, she gets a phone call from Tom – apparently his job in Boston fell through. Liz knows that Red sabotaged it so that Liz didn’t move to Boston. Liz heads home and Red is waiting for her – he apologizes for saying that her pregnancy was an inconvenience. He gets emotional and tells Liz about when her mother was pregnant with her, he explains that it wasn’t the most convenient time to get pregnant either – but she loved Liz and she was a blessing. Liz confronts Red about sabotaging Tom’s job – he insists that he did it just to protect her, and he can’t protect her if she is living in Boston. Liz kicks Red out, before he leaves he tells her that he booked a pregnancy massage for her and the masseuse will be there in the morning.

Tonight’s episode ends with Liz calling an adoption agency and leaving a vmail telling them that she is interested in giving up her child to a family.