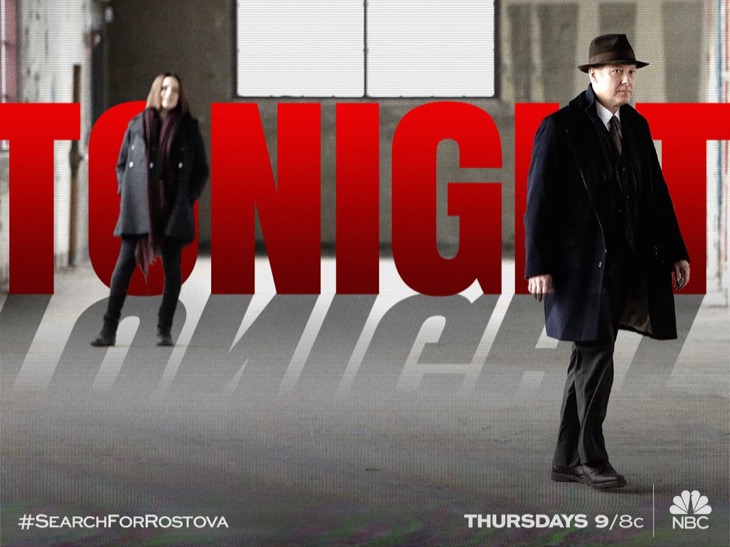 Tonight on NBC their criminal drama, The Blacklist starring James Spader continues with an all new Thursday February 25, season 3 episode 16 called, “The Caretaker.” On tonight’s episode, a State Department official is killed in Beijing, leading Red and Liz to “The Caretaker,” a shadowy keeper who maintains a safety-deposit vault for criminals.

On the last episode after the founder of a successful internet start-up is found dead, Red (James Spader) recognized the crime scene as the work of a notorious killer. Liz (Megan Boone) and the task force worked with Red to track the murderer through a dangerous underground news source. Meanwhile, Tom (Ryan Eggold) faced a life threatening situation, while Liz considered options for her baby. Did you watch the last episode? If you missed it, we have a full and detailed recap right here for you.

On tonight’s episode as per the NBC’s synopsis, “a State Department official is killed in Beijing, leading Red and Liz to “The Caretaker,” a shadowy keeper who maintains a safety-deposit vault for criminals. Also, Tom makes a risky decision, and Liz continues her quest to learn more about her mother.”

Tonight’s episode of The Blacklist kicks off with a news report in Beijing, China – an online recording has been leaked that proves that Zhang Lau was poisoned as part of a plot orchestrated by statesperson Robert Pritchard.

Pritchard is walking down the street and watching the news report on his cell phone. He freaks out – he calls someone and tells them that the recording is all over the news, they need to get him out of China ASAP While he is talking, two men run up on him and grab him and throw him in a car. Pritchard shouts that he has been framed by “The Caretaker.”

Meanwhile, a strange man dressed as a hobo is in a cemetery. He lights up a gas grill at the grave of a man named “Walters” and then he pulls out his cell phone and makes a call. It looks like the homeless man is the infamous Caretaker, he informs the person on the other end of the line that the “First secret has been released, the second one will come very soon.”

Elizabeth is getting ready for work – Tom surprises her with breakfast, he appears to be on the mend after the shooting. Elizabeth gets down on one knee and tells Tom that she has made a decision – “Yes,” she wants to get married. Tom is speechless. Elizabeth’s phone goes off – it’s Red, way to kill a moment.
Elizabeth heads to work, a man stops by and says that he is delivering Tom’s prescriptions. After Elizabeth leaves, the guy from the “pharmacist” gives Tom a bag with illegal percocets and a handgun. Tom pays him with cash.

Liz meets up with Red – she tells him that she is keeping the baby and he is thrilled, however less thrilled when he learns that Liz and Tom is getting married. Red wants to talk about Robert Pritchard, he was fished out of the river in Beijing, the Chinese killed him for assassinating Zhang Lou. Apparently, a business man named Addison Wen helped Pritchard kill Zhang, and he recorded the conversation between himself and Pritchard.

This is where the Caretaker comes in. He is the secret keeper of wealthy and high-profile criminals. They give the Caretaker their secrets and instructions as to when to release them, like if they are arrested or killed. The problem is, Addison Wen did not tell the Caretaker to release his secret recording – something is horribly wrong. The Caretaker has 1000’s of closely guarded secrets and if he starts leaking them all, all hell is going to break loose.

Elizabeth heads to the office and briefs Cooper and the rest of the team on the Caretaker. Harold tells them to start with Addison Wen to see how he contacted the secret keeper. They need to move fast before the Chinese get a hold of Addison.

Meanwhile, Tom is back onhis feet – and already behaving wrecklessly. He pays his ex-girlfriend a visit – the one that just shot him and nearly killed him – at her hotel and catches her in the shower, he says that he has come to negotiate. He knows that he is weak from being shot and tries to attack him, Tom manages to get the best of her and slams her on the ground and holds her at gunpoint.

The Caretaker is digging up a grave in the middle of the night at a cemetery with a back-ho. While he uncovers the grave he talks out loud and says, “Hello Jeanette.”

Ressler and Samar bring Addison Wen in for questioning – they are trying to get information from him about the Caretaker. Addison says he doesn’t know his name, he never met him, he put the recording in “the tubes.” In the 1800’s there were tubes that span under the city of New York that were once used by the post office, library, medical offices, etc. It’s how the Caretaker received all of his secrets – and also the perfect underground tunnels for criminals to use to pass along intel right under the agents’ noses.

Elizabeth fills Red in on the tube system – he knows the man that runs the tubes, his name is Hugo. He keeps the tubes up and running and charges criminals to pass their stuff through them. Red takes Liz to meet Hugo. Red explains to Huge that he needs one of his clients’ addresses. Red promises Hugo that if he gives up the Caretaker, Elizabeth will make sure that the FBI leaves his tube system alone.

Meanwhile in the cemetery, the Caretaker is still talking to Jeanette. He has pulled her casket up out of the ground and is trying to pry it open with a crowbar.

Ressler and Samar got the address to the Caretaker’s house, which is coincidentally at the cemetery. They arrive in the middle of the night and find him sitting in Jeanette’s coffin with her – he has dug up a canister that he had inside of her coffin, it looks like one of the “secrets” that he has passed through the tubes. Ressler and Samar arrest him and bring him in to custody.

Back at the FBI office, the Caretaker confirms that he released the video. The Caretaker reveals that someone took his daughter Rose hostage and tortured her – and sent him a video of it. They told him if he didn’t release Addison Wen’s video, Rose was dead. Once he released that video – they demanded another one and still haven’t given back his daughter. The second secret is the one that was in a canister in Jeanette’s grave. It’s an airline contract between the German government and a company called Lufreiber. There was a terrorist attack on one of the planes and Lufreiber covered it up for the German government – 100’s of people were killed. Samar fills Red in on what’s going on, he warns her under no circumstances to expose the Germans – there is no coming back form that.

Elizabeth is going some investigating of her own, about her mother Katarina Vastova. She visits an old man named Velov in a restaurant, she met him about a year ago. Velov is old, and doesn’t look so good he’s on an oxygen tank and in a wheelchair. Velov says he wishes he could help her, but he didn’t know Katarina, she was just a name that he used to hear. Velov wants Elizabeth’s help – he doesn’t know where his daughter is – he has written her a letter before he dies, and he wants Elizabeth to find her and deliver the letter to her. After Elizabeth leaves – Velov’s caretaker Darla calls Red and reports to him that Velov didn’t tell her anything, he talked about his own daughter most of the time.

Red and Elizabeth get to work tracking down the kidnapper’s van – Red recognizes some custom work on the van in the pictures, and knew which chop-shop it had been to. They get an address for the owner from the chop-shop, and Elizabeth calls it in to Harold. Harold tells them he needs them back at the office ASAP. Harold released the German contract secret and now the Germans are furious – they refuse to share their intel on terrorists in the United States that are about to attack on American soil.

Meanwhile, Ressler and Samar head to the address that they got from the chop-shop. They find the Caretaker’s daughter alive and well, they rescue her and arrest the man that was holding her hostage. Ressler grabbed a book on the bed next to Rose and she confirms that it was her father’s ledger – the book full of the secrets and where they are hidden.

Samar questions Rose back at the office to try and figure out who kidnapped her – she says she has no idea. They question the man that was holding her hostage and learn that his name is Van Zandt, and he is actually Rose’s brother. He says that he was just trying to help Rose.

A call comes in – Red located the cargo truck with the terrorists in it, and enough C-4 to take out the whole city. Ressler, Samar, and the rest of the team leave Rose and her brother in their cells and rush out to take down the terrorists. Samar shoots and kills the men in the truck, but when they open the back, they learn that the bomb has already been activated. They have less than 3 minutes until it is detonated. Aram talks Ressler through cutting the wires over the phone, and they are able to disable the bomb in the nick of time.

Tonight’s episode ends with Elizabeth showing up on Irina Velov’s doorstep with the letter from her dad. Irina laughs and says that she talks to her dad every day and she knew Liz would be coming. Irina explains that the letter is actually for Elizabeth. Velov wanted to tell her about Katarina but was told not to – so he wrote her the secret letter instead. Elizabeth sits in her car and cries while she reads the letter – which also came along with a picture of a little girl, presumably Elizabeth.

Red is leaving the FBI office and runs in to Elizabeth – she is furious – her mother is alive, Red has been lying this entire time. She knows that the person Red was afraid would find her after the manhunt is her own mother. Elizabeth scoffs that some things “can’t be forgiven” and storms off.