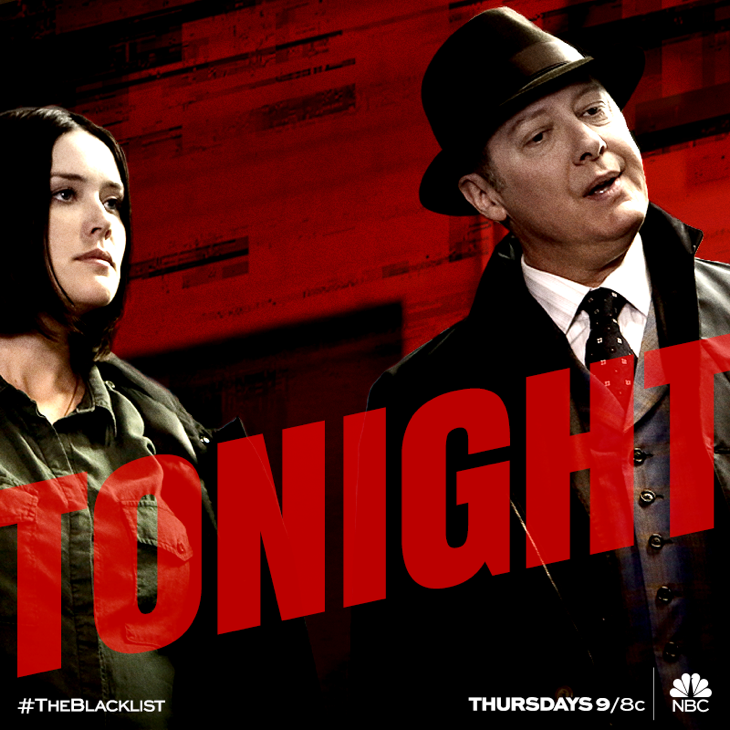 On the last episode a rare medieval device was used in a murder, prompting Red to warn the task force that a lethal vigilante group from the Middle Ages was now in operation. Meanwhile, Liz received startling news and cautiously planned her next move. Did you watch the last episode? If you missed it, we have a full and detailed recap right here for you.

Tonight’s episode of The Blacklist kicks off with a man named Ericson arriving at a restaurant with his date – he spots a man seated in the restaurant named Raphael and pulls out a gun and stars firing a gun, Raphael fires back and shoots Ericson in the chest, he’s rushed to the hospital. Apparently, his family is in the mob, and they gather around the hospital room ad plot their revenge. A strange man approaches Ericson’s brothers – Dag and Gregor – in the hallway outside the hospital room and offers his condolences.

Meanwhile, Red is out on a date with a woman – he gives her a German trinket for her collection. The woman gets choked up and tells Red that she is getting married, but she is still in love with Red.

Elizabeth is at the adoption agency, ironically it’s the same agency that she and Tom were using to try and find a baby to adopt before their lives went to hell. She questions the woman in charge about the procedure, and learns that she will need Tom to sign off and help her find the prospective parents.

Elizabeth heads home and finds Red sitting in her living room – he says that he has urgent work for her. Hans Ericson was shot and killed, and his father Mads Ericson runs a criminal conglomerate, by the Vacaro crime family. The Vacaros have been at odds with the Ericson Family for years. Red says that the strange man at the hospital – Alistair Pitt – is coming to unite the two families and merge them together to create the most dangerous crime family the country has seen in decades.

Tom is desperate for a job to support the baby that he doesn’t know Liz is trying to give up for adoption. He tracked down his ex-girlfriend/former handler, and they have an awkward run-in. He tries to convince her to let him in on the new job that she is working – but she laughs in his face and reminds him that he dumped her for his mark, and got her pregnant.

Ressler meets up with the DEA, agent Tucker, and tries to get information on the Vacaro and Ericson Family. The DEA laughs when Ressler says that they have intel that the Vacaros and Ericsons are going to merge. Tucker checks with his intel and learns that Ressler is correct, and Vacaro and Ericson are meeting at a local park.

Ressler and his tea, plug DEA agents rush to the park – the intel was correct, Vacaro and Ericson are both there. But, they they head in to a local diner and sit down with Alistair Pitt. Pitt convinces them that both of their businesses are going to go under – unless they merge. Pitt proposes that Ericson’s oldest son marries Vacaro’s oldest daughter. Pitt shows them his client list, wealthy and powerful families, and warns them that if they back out of the merger and he loses money, he will send his clients after them.

Meanwhile, Tom’s ex finally caves and says she has a job for him – she wants him to help her with a heist. She and her team have their eyes on Reinder-de-Groot, one of the wealthiest diamond traders in the world. Tom laughs that what she is proposing is not a job, it’s a “suicide mission.” She is trying to get him killed. Apparently dozens of people have tried to steal from Reinder in the past, and it didn’t pan out.

Red heads back to the restaurant to meet with the mystery woman again who is apparently madly in love with him but marrying someone else. After their romantic dinner, Red meets up with Liz. They meet up at a warehouse and Liz has brought along a photo of Alistair Pitt. Red gives the photo of Pitt to a man that works at the warehouse and orders him to find him – he texts the photo of Pitt out to all of his contacts. It’s not long until they find him.

Samar and Ressler head to the hotel where Red learns that Pitt is staying. Samar and Resler find him in the lobby having tea with Ericson. Ericson tells him that his son is not on board – but he wants to go through with the plan, he tells Pitt to arrange the marriage. After the meeting Ressler follows Pitt to a hospital.

Ressler calls Aram and tells him to search the employees and patients for the last name Ericson or Vacaro to try and figure out what Pitt is up to. Aram calls him back and says that one of the Ericson boys’ fiances is a nurse at the hospital. While they are on the phone, Anna walks out of the hospital with Ericson and a black SUV drives by and shoots her in the chest.

After the job is done, Pitt makes a run for it. Instead of chasing Pitt, Ressler rushes to Anna’s side – she’s still alive, barely. He tries to flag down some of the doctors in front of the hospital and calls for help. Ressler is too late though, Ericson’s fiance is pronounced dead.

Ericson rushes home to tell his father that Anna is dead and says he wants revenge on the Vacaros, he knows it was them. Pitt arrives at Ericson’s house and tells him that they need to talk. Obviously, Christopher is confused and demands to know “who the hell” Ericson is and why he was at the hospital when his fiancé was murdered.

Meanwhile at the Vacaro house, his wife is not thrilled about her husband marrying their daughter off to an Ericson, he scoffs that he has a plan. Apparently Vacaro is playing Ericson and Pitt – he has no intention of marrying off his daughter to the family. He is just using the wedding as a ruse to get them all in one place at the same time – then he plans on murdering the entire family. Vacaro whispers to his wife, “tomorrow we kill all of the Ericson’s.”

Red decides to takes matter in to his own hands, and he meets with the Ericson Family to try and get intel on the merge. Meanwhile, Elizabeth and Ressler have Pitt’s phones tapped – they hear him discussing the time and date of the wedding.

Ressler, Liz, and the DEA agent head to the Vacaro-Ericson wedding and set up surveillance. To their dismay they see Red arrive at the wedding. The Vacaros and Ericsons are all milling around and not speaking to each other. Ressler and Liz are snapping photos, but they don’t want to make a move until Pitt arrives.

Meanwhile, Tom and his ex-girlfriend have put together what they think is a fool-proof plan and make a move on De Groot. Tom’s ex poses as a thief and he pretends to bust her in the jewelry shop and informs De Groot that he is an FBI agent to gain his trust. De Groot shows Tom to the back of the office so that he can “secure his prisoner.”

The Vacaro and Ericson wedding is under way. Right before they say their vows – Red decides to make a toast, and casually mentions that Pitt had Christopher’s fiancé killed. Christopher freaks out, the Ericson’s freak out, and then the Vacaros open fire. The FBI rushes in to the wedding in the middle of the shoot out.

Red grabs Pitt and tries to disappear out the back door. Elizabeth chases after him, furious, and shouts that Red didn’t care about the Vacaros and Ericsons this whole time – he just wanted Pitt. While they are leaving the back door of the restaurant, the DEA agent tries to stop them, Red shoots him in the neck and keeps it moving.

After everything is said and done, back at the office – Samar is trying to plan a babyshower for Elizabeth. She breaks the news to her that she is planning on giving the baby up for adoption.

Red has another flashback – he heads to a bar to meet up with his girlfriend Josephine, she calls him crying hysterically and says that her boyfriend found out about them and he is going to kill her. When Red arrived at the apartment, Josephine was beaten and barely breathing – Red was too late.

Red brings Pitt to the same apartment where he found Josephine dead, he explains to Pitt that he blames him for Joesphine’s death. He growls at Pitt, “You destroyed a creature more beautiful than you could ever comprehend.” Then he shoots him to death. Afterwards, Red visits Josephine at a home – she’s in a wheelchair and paralyzed, she doesn’t speak – just stares out the window. Red kneels by her wheelchair and tells her that “it’s done.”