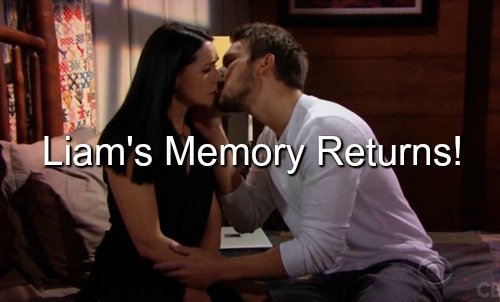 “The Bold and The Beautiful” (B&B) spoilers indicate that Quinn Fuller (Rena Sofer) is in over her head with the Liam Spencer (Scott Clifton) kidnapping-turned-lovefest that’s getting twistier by the moment. While she’s warming up to Liam, Quinn is also pushing Wyatt Spencer (Darin Brooks) to get busy.

When Quinn finds out that Wyatt proposed to Steffy Forrester (Jacqueline MacInnes Wood), she’s all into it and pushes Wyatt hard to elope with Steffy while Quinn still has Liam under her control. The problem is, Steffy needs to hear from Liam “It’s over” before she will say “I do.”

But after Deacon Sharpe (Sean Kanan) joins in on Quinn’s scheme with Liam, they’ll come up with a way to convince Steffy that Liam is really done with her – in the form of a devastating voice mail. Trust those two to find a way to con Steffy.

This will allow Wyatt to successfully press Steffy into a quickie marriage. But B&B spoilers tease that Liam will recover his memory just in time to interrupt their hasty wedding. Perhaps it will be at the moment when the officiant says “speak now or forever hold your peace…”

But will it be too late by then? Will Steffy listen to Liam tell her it’s a mistake? If Liam is able to stop the wedding, will Steffy be so horrified that Liam has been with Quinn – perhaps even in the “biblical” sense by then – will she decide to go forward with the wedding to Wyatt?

And another consideration – even if Liam stops Wyatt and Steffy’s wedding – will Liam have fallen too hard for Quinn by then to be with Steffy? Will he be haunted by his time with Quinn and decide that he has to have her even though their relationship is clearly inappropriate?

In a way, Quinn and Liam are an interesting yin-yang pairing. He’s such a good guy and she’s such a very bad woman that they temper each other and offer balance. And really, the age difference is no more appalling than Ridge Forrester (Thorsten Kaye) and Caroline Spencer (Linsey Godfrey).

Of course, there was the Steffy romance with Liam and Wyatt’s dad Bill Spencer (Don Diamont) – that was just as icky. Plus, since the writers have yet again resurrected the tired love triangle of Bill, Katie Logan (Heather Tom) and Brooke Logan (Katherine Kelly Lang) – this is at least new ground.

What do you think B&B fans, do you want to see a dramatic interruption with Liam shutting down Wyatt and Steffy’s wedding? Or do you hope they go ahead and get hitched and then everyone has to deal with the messy aftermath?