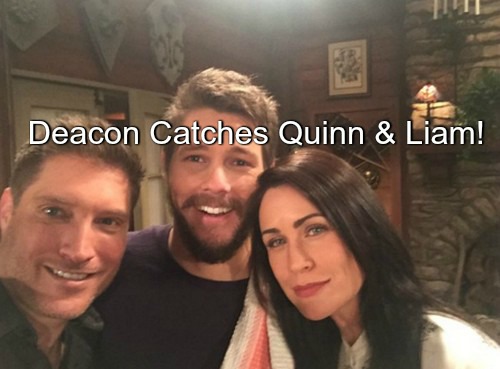 “The Bold and The Beautiful” (B&B) spoilers indicate that Deacon Sharpe (Sean Kanan) is back in LA and looking for his soon-to-be-ex Quinn Fuller (Rena Sofer). When he finds her at her Topanga cabin, Deacon is stunned to find she’s got a hot young guy stashed in her bedroom.

Deacon is further shocked to find it’s Liam Spencer (Scott Clifton) that she’s got warming her bed. Deacon wants answers since they only broke up a hot minute ago – Quinn takes a risk and decides to pull Deacon in on her scheme – he’s just as shady as she is, after all.

Quinn explains about Liam’s head injury and amnesia and that she’s got him tucked away to buy Wyatt Spencer (Darin Brooks) time to lock down Steffy Forrester (Jaqueline MacInnes Wood) in a rebound relationship.

Deacon decides to join the scheme and helps form a plan to convince Steffy that Liam is done with her once and for all. Steffy has been putting Wyatt off when it comes to getting intimate and wants to hear Liam’s voice telling her they are done.

Looks like Deacon’s plan will involve giving Steffy the verbal confirmation she needs to move on with Wyatt. Will Wyatt and Steffy be man and wife before Liam recovers his memories? Wyatt is moving fast at Quinn’s urging and Steffy may agree to elope.

But how long until Deacon finds out that Quinn is not just harboring Liam, but harboring affection for the guy as well? Will that be the end of any reconciliation hopes for Deacon and Quinn? Will Deacon soon be available for new romance while Quinn plays with her boy toy?

Fans have been crowing to have Sean Kanan back as Deacon and it looks like the new storyline will not disappoint. Anytime Quinn and Deacon are scheming together, it’s worth watching. Poor Liam won’t know what to do with both of them conning him…

What do you think B&B fans? Are you excited that Deacon is back just in time to help Quinn with her latest shady scheme? Will they be able to convince Steffy that Liam is done with her for good? Share your comments below and come back to CDL often for more “The Bold and The Beautiful” spoilers.