The Bold and the Beautiful (B&B) Spoilers: Flashbacks Reveal Dark Past of Quinn’s Childhood – Steffy Considers Life with Wyatt 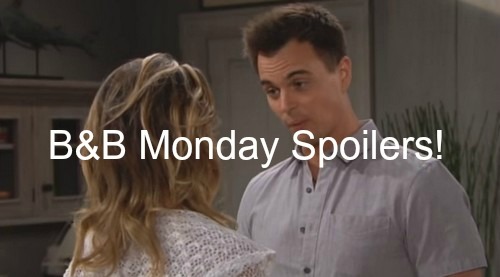 “The Bold and the Beautiful” spoilers for Monday, February 8, tease that all of Quinn’s (Rena Sofer) chats with Liam (Scott Clifton) will stir up old memories. Liam has been calling Quinn an angel and gushing about what a wonderful person she is. Quinn certainly isn’t used to this kind of praise.

Most people think Quinn is crazy and wicked, but she hasn’t always been that way. “The Bold and the Beautiful” spoilers indicate that we’ll see some moments from Quinn’s childhood. These flashbacks will clue us in on what led Quinn down a dark path. It seems Quinn’s mother wasn’t the best role model. B&B viewers will get a chance to learn how Quinn became the woman she is today.

Could these interactions with Liam change Quinn for the better? Don’t bet on it. Quinn is Quinn and that’s all there is to it. Later this week, Quinn will continue her plot to push Wyatt (Darin Brooks) and Steffy (Jacqueline MacInnes Wood) together. This scheme should eventually blow up in Quinn’s face as usual, but that won’t stop her from playing the game.

Of course, Quinn isn’t the only one making moves. Wyatt is starting to see this situation from his mother’s perspective. Steffy obviously still cares about Liam, but Wyatt wants her to see that he’s the man she should be with. Wyatt will attempt to rush this romance along.

“The Bold and the Beautiful” spoilers say Wyatt will point out that the most important thing a person can learn is what they want. Wyatt is hoping that Steffy will realize he’s the Spencer brother she desires. Steffy will definitely have a lot on her mind as she tries to come up with a response to Wyatt’s offer.

Wyatt is willing to spend the rest of his life with Steffy. Will Steffy be on board with that idea? Time will tell, but Wyatt has made real progress while Liam has been busy making out with Quinn. This whole ordeal has the potential to turn into a massive nightmare for all parties involved. Stick with the CBS soap for updates on the shocking conclusion of this storyline.

So B&B fans, what do you think about the news that Quinn will have flashbacks of her painful childhood? Are you glad we’re finally getting a glimpse of Quinn’s past? Will Wyatt pick up a few of his mom’s tricks? Will Steffy decide to put Liam behind her?

The Bold and the Beautiful (B&B) Preview Video for Monday, February 8 2016