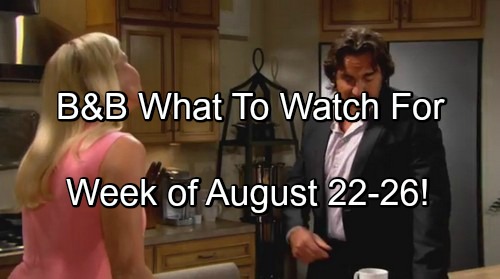 The Bold and the Beautiful (B&B) spoilers for the week of August 22-26 tease that Quinn (Rena Sofer) and Eric’s (John McCook) romance will continue to make waves. Ridge (Thorsten Kaye) will try to talk some sense into Eric, but his efforts will fail. Once Eric urges his son to shut up, Ridge will have to vent to someone else.

Brooke (Katherine Kelly Lang) will be happy to offer her support. She seems to enjoy these bonding sessions. B&B spoilers say Brooke will think all of this is beyond crazy. Ridge will gripe that this just isn’t like Eric. He’ll realize that Eric is quite smitten and that’s a problem when you’re dealing with a schemer like Quinn.

Ridge will suggest that Quinn isn’t your average gold digger. Rick (Jacob Young) and Maya (Karla Mosley) will also chat about the situation. They’ll mull over what this might mean for the future of Forrester Creations.

The Bold and the Beautiful spoilers say Rick will believe this is a total catastrophe. Quinn has Eric wrapped around her little finger and that can only lead to trouble. Ridge and Rick haven’t agreed on much of anything in a long time, but they’re definitely on the same page now.

Of course, Wyatt (Darin Brooks) would love to see Eric and Quinn split. If they don’t, Wyatt fears his marriage will come to an end. Steffy (Jacqueline MacInnes Wood) threatened to leave Wyatt if Quinn didn’t cooperate and she wasn’t bluffing. Despite Wyatt’s desperate plea, Steffy will pack up her stuff and move out of the beach house.

Steffy will insist that she stood by Wyatt after Quinn’s deception was revealed. She tried to hang in there and make this relationship last. Wyatt won’t think that makes any difference if Steffy is leaving now. He’ll feel like Steffy is just throwing away everything they shared.

Even though they came together because of Quinn’s manipulation, Wyatt was still there for Steffy when she needed him most. Steffy was distraught when she thought Liam (Scott Clifton) had abandoned her, but Wyatt brought her through the crisis. He helped her see light at the end of the tunnel.

Wyatt undoubtedly rushed through the dating phase, but that’s just how he rolls. When Wyatt falls for a woman, he falls hard. Nevertheless, he dropped the ball a little once Liam reentered the picture. In light of Quinn’s actions, Wyatt should’ve taken a step back and asked Steffy what she really wanted.

Instead, Wyatt simply stated that nothing had changed. In reality, EVERYTHING had changed for Steffy. Quinn made her settle for a backup beau instead of the man she truly wanted to be with. Wyatt even made excuses for Quinn’s behavior. He pretended he could handle her when things got worse.

Now Steffy needs some space, but Wyatt won’t want to give it to her. That will only drive Steffy further away. Meanwhile, The Bold and the Beautiful spoilers say Thomas (Pierson Fode) plans on doing some matchmaking. He’s got a new bromance going on with Liam, so he’ll hope to point Steffy in the right direction.

Will Thomas’ tactic work? Time will tell, but Liam will try to make the most of this chance. We’ll give you updates as more news emerges. Stay tuned to B&B and don’t forget to check CDL often for the latest Bold and the Beautiful spoilers, updates and news.