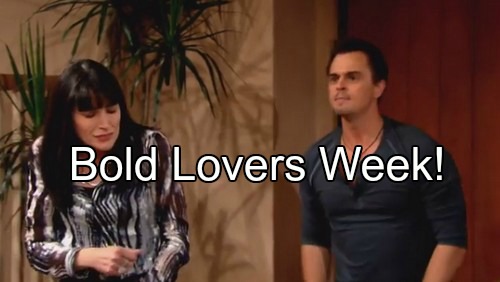 The Bold and the Beautiful (B&B) spoilers for the week of August 22-26 tease that we’ll see plenty of romantic shakeups. Some characters will be drawn to former flames while others spark something new. Many will chase after broken dreams, but a few will struggle through a nightmare.

For starters, we have to talk about Quinn (Rena Sofer). She’s establishing herself as Eric’s (John McCook) leading lady and that’s causing all kinds of problems. The Bold and the Beautiful spoilers say Steffy (Jacqueline MacInnes Wood) will do just what she promised. She’ll move out of Wyatt’s (Darin Brooks) house and seek shelter from the Quinn storm elsewhere.

Thomas (Pierson Fode) will welcome Steffy with open arms at his loft. He’ll realize he’s in the prime position to push Steffy toward Liam (Scott Clifton). Of course, it may not take more than a gentle nudge. Steffy has been pining for Liam throughout her entire marriage to Wyatt.

On the other hand, Thomas should really proceed with caution. It could backfire if he tries to get Steffy in Liam’s arms before she’s ready. Nevertheless, Thomas will give it a try and hope for the best. He’ll also spend an afternoon chatting with Sasha (Felisha Cooper). These two awfully getting cozy. It won’t be long until they take this relationship a step further.

Meanwhile, Katie (Heather Tom) and Bill (Don Diamont) will sit down to iron out the details of their divorce. The Bold and the Beautiful spoilers indicate that their negotiations may be a bit rocky. Bill has already offered Katie a hefty settlement package, but Ridge (Thorsten Kaye) wants her to snatch up his Forrester shares, too.

Unfortunately, Bill knows Ridge is involved and there’s no way he’s giving up those holdings without a fight. Ridge urged Katie to play dirty and get Bill to cave in. Will Katie manage to score the shares? Ridge is certainly counting on Katie to make it happen. He desperately wants to take control of his family’s company.

The Forresters think Eric belongs in a straitjacket now that he’s dating Quinn. They can’t understand what he sees in her. Eric doesn’t mind that they aren’t on board. He’s attracted to Quinn’s beauty, intelligence and charm. Eric believes Quinn’s scheming side is long gone, but he’ll probably be mistaken about that.

As for Bill, he’ll sort out the settlement and focus on more important matters. B&B spoilers say Bill will come up with a plan to sweep Brooke (Katherine Kelly Lang) off her feet. Once Bill realized he was still in love with Brooke, there was no turning back. He just can’t stand it without Brooke in his life.

It sounds like Bill will have his work cut out for him. Brooke doesn’t want to rock the boat with Katie. She’s also been bonding with Ridge lately, so that’s another potential obstacle. We’ll give you updates as news emerges on this plot.