‘The Bold and the Beautiful’ Spoilers: Wyatt Begs Steffy Not to Leave, Desperately Fights for Marriage – Eric Shuts Ridge Down 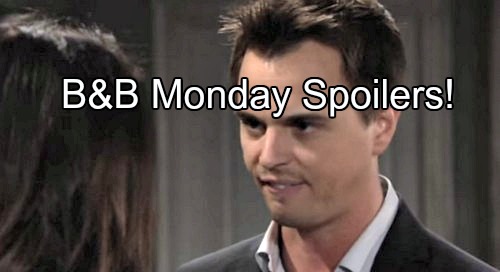 The Bold and the Beautiful (B&B) spoilers for Monday, August 22, tease that Quinn (Rena Sofer) and Eric’s (John McCook) love saga will continue. Unfortunately, nearly everyone they know is against their relationship. Quinn and Eric are going to face an uphill battle as they keep their romance moving along.

B&B spoilers indicate that Ridge (Thorsten Kaye) will confront Eric about offering Quinn a key to the mansion. Eric recently kicked Ridge out and asked Quinn to move in. Ridge will maintain that Eric has lost it. He can’t comprehend how Eric could do this to Steffy (Jacqueline MacInnes Wood) and their entire family.

Eric won’t appreciate Ridge’s constant criticism. Ridge doesn’t support their relationship and that’s fine, but Eric doesn’t want to listen to his loud mouth rant about it. The Bold and the Beautiful spoilers say Eric will insist that he’s Ridge’s father, not his child. He’ll think Ridge needs to start understanding that.

Quinn will have her own family matters to worry about. She’ll give Eric updates on her nasty fight with Steffy. Quinn will admit that she could cost Wyatt (Darin Brooks) his marriage. Steffy has threatened to leave Wyatt if Quinn shacks up with Eric. It’s definitely a difficult situation.

Eric will realize that this is tough on Quinn, but he’ll probably urge her to make her own needs a priority for a change. Quinn’s whole life has been about helping Wyatt achieve his dreams. Now it’s time for Quinn to live a few of her own.

Eric wants to be with Quinn and he’ll believe their love can overcome the obstacles. He views Quinn as a changed woman and he can’t wait to see what’s ahead for them. Quinn may just have to trust that everything will work out like it’s supposed to. If Wyatt loses Steffy, then maybe they just weren’t meant to be.

Of course, Wyatt won’t have the same perspective. He desperately wants to keep his wife. The Bold and the Beautiful spoilers say Wyatt will beg Steffy to stick with him through this crisis. He’ll declare that he would do anything for Steffy. Wyatt will make a passionate plea and hope that Steffy will remain committed to him.

However, Steffy is just too upset to remain in Wyatt’s home. She’ll move out of the beach house and Wyatt’s heart will sink. Steffy will decide to stay at Thomas’ (Pierson Fode) loft for a while. It doesn’t sound like Steffy is filing for divorce just yet, but it’s clear that she’s leaning in that direction.

In other words, it will take a soap miracle to convince Steffy to stay in this marriage. Wyatt will hope for the best, but he should prepare for the worst. Liam (Scott Clifton) will certainly keep his fingers crossed for a reunion with Steffy. She may be tempted now that Quinn has stirred up even more trouble.

Some exciting drama is in the works. We’ll keep you posted as more news comes in. Keep watching B&B and don’t forget to check CDL often for the latest Bold and the Beautiful spoilers, updates and news.