The Bold and the Beautiful (B&B) Spoilers: Liam Grateful, Thinks He Has His Life Back – Wyatt and Steffy Panic 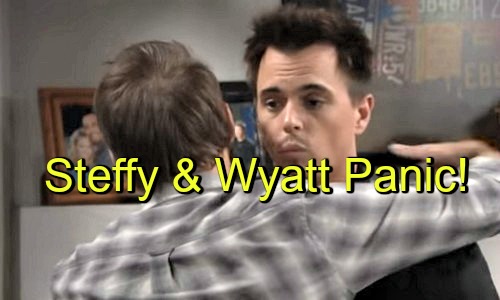 “The Bold and the Beautiful” spoilers for tomorrow’s episode, Tuesday, April 12, tease that there are winners in brother and sister pairs and the losers are about to explode! Julius (Obba Babatunde) will have some harsh words for Sasha (Felisha Cooper). He won’t be pleased with how Nicole’s (Reign Edwards) life has been turned upside down.

Julius will maintain that Sasha is the reason for all of the turmoil.

Sasha will admit that Nicole is going through a rough time and she’ll be sorry about that. Nevertheless, Sasha will suggest that Julius’ other daughter has never been happier. Naturally, Zende (Rome Flynn) is the reason for Sasha’s bliss.

She’ll think Nicole couldn’t keep her man satisfied, so she took advantage of an opportunity. If Julius and Nicole don’t like it, that’s their problem.

Later, Sasha and Zende will share a tender moment. As Zende revs up the romance, Sasha will point out that he really knows how to make a lady feel appreciated. Sparks are obviously flying between these two. In fact, it appears they’ll declare love for each other pretty soon.

Nicole certainly isn’t going to approve when she hears the news.

Other “Bold and the Beautiful” spoilers reveal that Liam (Scott Clifton) will express his gratitude for everything Wyatt (Darin Brooks) has done. The dramatic rescue didn’t go unnoticed. Liam will thank Wyatt for giving him his life back.

As Liam wraps his arms around his brother, Wyatt and Steffy (Jacqueline MacInnes Wood) will exchange a nervous glance.

Liam thinks he can pick up where he left off, but that won’t be the case. B&B viewers know that Wyatt has hijacked his bro’s career and stolen his fiancée. Where does that leave Liam? It’s tough to say. This is a huge mess and it’s only going to get messier.

Elsewhere, Bill (Don Diamont) will do everything he can to track down Quinn (Rena Sofer). He’ll be determined to make Quinn pay for what she did to Liam. However, Quinn gave an impassioned speech to Deacon (Sean Kanan) about heading off to enjoy their second chance together.

It sounds like Quinn might manage to give Bill the slip for now. Stick with “The Bold and the Beautiful” to see if justice will ever be served.

So B&B fans, what do you think about Julius and Sasha’s constant clashing? How will Liam react when he gets updates on Wyatt stealing his life? Will Deacon help Quinn avoid capture for the time being?

Voice your opinion in the comments below and don’t forget to check CDL often for the latest “The Bold and the Beautiful” spoilers, updates and news.