‘The Bold and the Beautiful’ Spoilers: Chaos Erupts Over Quinn’s Return as Jewelry Designer – Thomas and Sasha’s Bond Grows 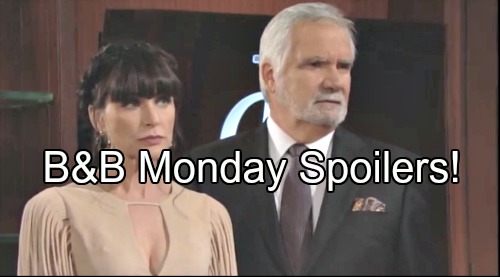 The Bold and the Beautiful (B&B) spoilers for the new episode on Monday, August 15, tease that Eric’s (John McCook) decision will make waves at Forrester Creations. He’s bringing Quinn (Rena Sofer) back on board as a jewelry designer and everyone will have something to say about it. Eric will get plenty of criticism for his risky choice.

Pam (Alley Mills) will pipe up about how wrong this is. Steffy (Jacqueline MacInnes Wood) will agree that Eric is asking too much. She won’t see how Eric expects them to get past Quinn’s horrible behavior. Does he really think they can just welcome Quinn back to the company with open arms?

Eric will understand that there’s some bad blood, but he’ll ask for tolerance. The Bold and the Beautiful spoilers say Eric will mention that he hasn’t always agreed with the decisions each family member has made. Nevertheless, he’s tried to offer his support. Eric will insist that he deserves the same respect.

Steffy cares about her grandfather, but she won’t know how she’s supposed to handle having Quinn at the office. Steffy’s mother-in-law is invading every area of her life. She can’t cope when this threat surfaces around every corner. It’s clear that Steffy is quickly losing her patience.

Meanwhile, Liam (Scott Clifton) will try a new tactic to get what he wants. He’s been attempting to get through to Steffy, but he’s about to shift his focus to Wyatt (Darin Brooks). B&B spoilers say Liam will point out that Quinn can’t be trusted. He’ll believe that changes need to be made immediately.

Other Bold and the Beautiful spoilers reveal that Thomas (Pierson Fode) and Sasha (Felisha Cooper) will have another deep conversation. These two have really hit it off. They’re connecting over their similar issues. Daddy drama and complex love stories are a couple of things they have in common.

Sasha will open up to Thomas about going after Zende (Rome Flynn). She’ll admit that she feels guilty for interfering in Nicole’s (Reign Edwards) relationship. Thomas will assure Sasha that she’s not a bad person. He’ll think Sasha was just excited about feeling love from a man. That’s something she never got from her father.

Julius (Obba Babatunde) maintains that Sasha was a mistake and that mentality has taken a toll on her. She’s probably started to believe it herself. Thomas will likely comment on what a strong, beautiful woman Sasha has become.

Sasha was born into difficult circumstances and she still faces challenges in her family. She hasn’t always made the best decisions, but she’s trying to turn her life around. That’s something Thomas can relate to as well.

It sounds like this friendship is already moving toward love. We’ll give you updates as more news comes in. Stay tuned to B&B and don’t forget to check CDL often for the latest Bold and the Beautiful spoilers, updates and news.