The Bold and the Beautiful (B&B) Spoilers: Ivy Takes Advantage of Liam’s Accident – Zende Gets Closer to Sasha, Nicole Irked 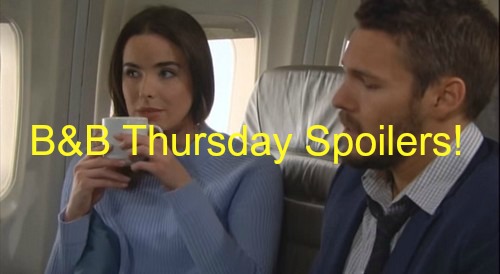 “The Bold and the Beautiful” spoilers for Thursday, January 7, tease that Liam (Scott Clifton) will resolve to work things out with Steffy (Jacqueline MacInnes Wood). Liam will tell Ivy (Ashleigh Brewer) that Steffy deserves better from him. It sounds like Liam has had cooled off and he’s ready to make up with his fiancée. The only problem is that he’s currently headed to Australia with Ivy.

When Liam mentions that he’s engaged to Steffy, Ivy will suggest that maybe he shouldn’t be. It seems Ivy plans on taking full advantage of their accidental trip together. Ivy may not be able to win Liam over during the flight, but perhaps she can plant some seeds of doubt that will prove crucial later on.

In Los Angeles, Steffy will begin to wonder if Liam intends on giving her a second chance. Liam still hasn’t been in touch with Steffy and she’ll fear that his silence means he’s truly done with her. Steffy will believe Liam may need some time to think, but she’ll know they can’t move past this if they aren’t talking.

Steffy should be careful what she wishes for. “The Bold and the Beautiful” spoilers indicate that Liam will finally call Steffy, but she won’t approve of what he has to say. It appears Liam’s attempt to do a good deed could end up causing more trouble than it was worth.

Meanwhile, Zende (Rome Flynn) will open up to Sasha (Felisha Cooper) about his crazy dream. It looks like Zende wants to try his hand at fashion photography. Sasha will be happy to serve as a photogenic subject. In fact, Rick (Jacob Young) will soon hire Zende as a Forrester photographer and Sasha as a model.

Unfortunately, Sasha and Zende’s newfound closeness could irk Nicole (Reign Edwards). B&B viewers know that Nicole is starting to become possessive of Zende. Nicole is obviously becoming insecure now that her pregnancy is moving along. Will Sasha continue to pull Zende in her direction? Stick with “The Bold and the Beautiful” for updates on how this love triangle might heat up.

So B&B fans, what do you think about the news that miscommunication will come between Steffy and Liam? Will the confusion tear their relationship apart? Will Zende grow even closer to Sasha as they work together? Voice your opinion in the comments below and don’t forget to check CDL often for the latest “Bold and the Beautiful” spoilers, updates and news.

The Bold and the Beautiful Video Promo for Thursday, January 7