The Bold and the Beautiful (B&B) Spoilers: Sasha Rips Into Julius for Cruel Treatment of Her Mom – Threatens Full Disclosure? 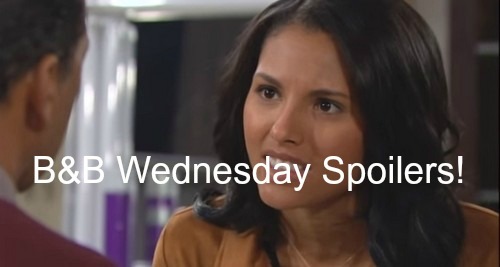 “The Bold and the Beautiful” spoilers for Wednesday, January 6, tease that Julius (Obba Babatunde) will face a major confrontation as soon as he returns home from Hawaii. Sasha (Felisha Cooper) will finally have enough of Julius acting like she doesn’t exist. Julius will scowl as Sasha angrily asks what she’s done to deserve this harsh treatment.

Julius won’t plan on making any changes to his behavior. It seems Julius has no intention of giving Sasha attention or anything else. Of course, Sasha won’t be on board with that. “The Bold and the Beautiful” spoilers say Sasha will rip into Julius for how he treated her mother as well.

She’ll remind Julius of all the years he promised that he was going to leave Vivienne (Anna Maria Horsford).

It’s clear that the Avants are a family that’s always had skeletons in their closets. First, Julius wanted to keep Maya’s secret quiet. It took Julius years to acknowledge Maya (Karla Mosley) as a woman. Now we’ve learned that Julius has also swept an affair under the rug.

Sasha is fired up and she could expose everything if Julius doesn’t give into her demands. Vivienne has been willing to put up with a lot from her husband, but would she stand by him if she knew the truth about Sasha? It’s possible that Vivienne already has a hunch about Julius’ cheating, but she could be completely blindsided by the news that he fathered Nicole’s (Reign Edwards) close friend.

Meanwhile, Liam (Scott Clifton) will find himself in a tricky situation. After slipping and getting knocked out on the plane, Liam will awaken and rush to make his exit. When the flight attendant tells him to buckle up, Liam will be stunned to discover that he’s headed to Australia with Ivy (Ashleigh Brewer).

“The Bold and the Beautiful” spoilers suggest that Liam may have slipped up more than he realizes. Steffy (Jacqueline MacInnes Wood) is going to have smoke coming out of her ears when she gets updates on his trip down under. Once all of this blows up, Steffy will undoubtedly appreciate having Wyatt (Darin Brooks) in her corner.

In fact, Wyatt’s support might be the only thing that holds Steffy together when she hears where Liam is. That dramatic moment is coming up later this week on B&B. Stick with the CBS soap to see if Steffy’s current relationship is in trouble.

So B&B fans, what do you think about Julius and Sasha’s conflict? Will Sasha eventually reveal the truth to the rest of the Avants? Will Liam’s trip to Australia destroy his romance with Steffy? Voice your opinion in the comments below and don’t forget to check CDL often for the latest “Bold and the Beautiful” spoilers, updates and news.

The Bold and the Beautiful Video Promo for Wednesday, January 6 2016