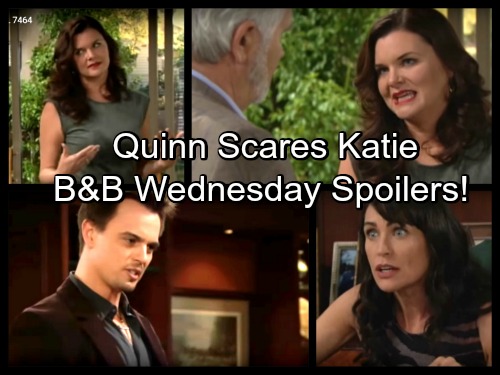 The Bold and the Beautiful (B&B) spoilers for Wednesday, November 16, tease that Katie (Heather Tom) will talk to Eric (John McCook) about her current dilemma. She’s interested in the house next door to the Forrester mansion, but she doesn’t want to rock the boat with Quinn (Rena Sofer). It’s clear that Katie already has one strike against her.

Eric will probably insist that having Katie as a neighbor would be wonderful. She’s a good friend and the house is close to Will’s (Zane Achor) school. As for Quinn, Eric might think he can take care of the fuss. He’ll likely suggest that he can smooth things over with some reassurance. Eric loves Quinn and he wants her to feel secure in their relationship.

The Bold and the Beautiful spoilers state that Katie will still have some concerns. She’ll point out that she doesn’t want Quinn as an enemy. That’s especially true if Katie is going to be living right next door. She has no desire to face daily battles. Katie wants to get along with Quinn, but that’s going to be a tough task.

Meanwhile, Quinn will meet up with Wyatt (Darin Brooks) to discuss her frustration. She’ll fill her son in on Katie’s visit with Eric. Quinn will maintain that it was highly inappropriate for Katie to be sniffing around her husband. She doesn’t like the idea of Eric entertaining beautiful women without her knowledge.

The Bold and the Beautiful spoilers say Wyatt will urge Quinn to settle down. He’ll think she’s simply being paranoid about all of this. Wyatt will contend that Katie has no plans to seduce Eric. He’ll believe his mom needs to tame the green-eyed monster.

Quinn will argue that she’s not jealous and she’s not insecure. She’ll just think she’s being smart. Eric is only human and he could be tempted to stray. Quinn feels like she can solve the problem by keeping Katie out of the picture. She hopes to stop this potential fling before it starts.

Elsewhere, Bill (Don Diamont) will want to have an honest chat with Brooke (Katherine Kelly Lang). He’ll think it’s time for them to figure out where they stand. Brooke’s feelings for Ridge (Thorsten Kaye) are obviously becoming a big issue.

Bill understands that Ridge and Brooke have a long history that includes having a son together. He knows they’re going to remain on good terms, but he wants to make sure it’s platonic. Bill doesn’t want to move forward with Brooke unless she can commit to him.

Wednesday’s B&B preview shows Bill asking, “So is that relationship over or is this one, Brooke?” It appears Brooke will provide an encouraging response. Bill will eventually ask Brooke to elope. Will Brooke be on board with that suggestion? Regardless, Ridge still has a few tricks up his sleeve.

It sounds like this love triangle is getting hotter. We’ll give you updates as more news comes in. Stay tuned to B&B and don’t forget to check CDL often for the latest Bold and the Beautiful spoilers, updates and news.