The Bold and the Beautiful (B&B) Spoilers: Katie Rages at Brooke Over Bill Betrayal, Knocks Sister Down in Fight 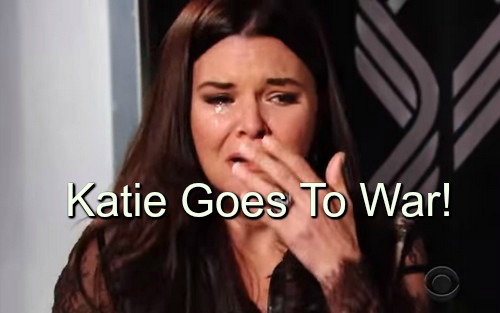 “The Bold and The Beautiful” (B&B) spoilers indicate that Bill Spencer (Don Diamont) and Brooke Logan (Katherine Kelly Lang) may as well have been cheating already – since both will be punished by Katie Spencer (Heather Tom) very soon based on that assumption.

Bill has been constantly daydreaming about getting busy with Brooke, so in a way, he was emotionally cheating on Katie by fantasizing about her sister. What’s worse is that it wasn’t just sex he was thinking about – it was his love for Brooke. In a way, that’s a deeper betrayal.

For Brooke’s part, she is struggling to keep Bill at arm’s length because she still loves him and wants to be with him but doesn’t want to estrange her sister. When Bill gets too close, Brooke will have a breakdown and admit that he’s the love of her life.

Too bad Katie is eavesdropping at the door and misreads this situation. Brooke was actually rejecting Bill while admitting she still cared for him. Katie, however, took it as love declarations in the midst of an existing affair. Now Katie has to consider what she’s going to do about this.

Katie brought Brooke into Spencer Publications as a good faith gesture and, from Katie’s perspective, it’s less than a week on the job and she’s spreading her legs for her husband. That certainly sounds like something Brooke would do – but for once, she’s not up to her old skanky shenanigans.

Brooke was trying hard to behave but Katie’s confrontation with her may change all that. Katie will confront her hubby and tell him that she’s cutting Brooke out of their lives once and for all. Bill may try to insist he and Brooke aren’t carrying on – because they are not – but Katie won’t be dissuaded.

Bill can either defend Brooke – or save his marriage. But no matter what he decides, it won’t slow Katie’s roll on what she does next. Katie confronts Brooke and goes after her physically. Katie lashes out with both words and her body and knocks her sister down while verbally assailing her.

Brooke will be stunned – she had this great new job opportunity, was closer to her sister than ever, and had made it clear to Bill that she won’t betray Katie. Then Katie attacks. No way will Katie listen to any of Brooke’s denials – her mind is made up based on the snippet she overheard between Brooke and Bill.

But Katie may be her own worst enemy in this situation. If Brooke has no hope of ever reconciling with Katie, why not go after Bill? Will Brooke seek comfort in Bill’s arms after the catastrophic confrontation with her sister?

Eric Forrester (John McCook) will also step into the fray and try to make peace between the sisters but is that possible? Is there any coming back from this sister battle? How far will Katie take it with Brooke? Will Brooke let her sister attack with no defense because she feels she deserves it?

Stay tuned to CBS for weekday B&B drama between the Logan ladies – and check back with CDL every day for “The Bold and The Beautiful” spoilers and more.