‘The Bold and the Beautiful’ Spoilers: Liam and Katie Team Up, Keep Tabs on Love Interests – Partnership Turns to Romance? 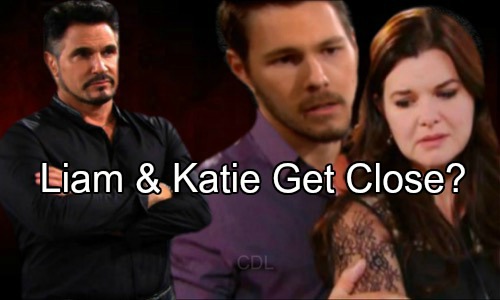 The Bold and the Beautiful (B&B) spoilers tease that Katie (Heather Tom) will continue to struggle with her doubts about Bill’s (Don Diamont) faithfulness. She’ll believe their marriage is headed down a dark path. When Katie can’t seem to silence her fears, she’ll turn to Liam (Scott Clifton) for help.

Katie will hope that Liam can offer some insight into his father’s feelings. Bill is a bit of a mystery to Katie right now. He claims that there’s nothing to worry about, but Katie’s instincts tell her something’s up. Ever since Brooke (Katherine Kelly Lang) declared her love for her ex, Bill and Katie’s relationship has suffered.

Liam will listen to Katie’s problems and share a few of his own. He’ll likely admit that he’s not sure about giving up on Steffy (Jacqueline MacInnes Wood). Liam is trying to let go, but it’s ridiculously difficult. The Bold and the Beautiful spoilers say Liam and Katie will seek a favor from each other as they attempt to quiet their concerns.

Katie will want Liam to keep tabs on Bill for her. Liam may or may not mention what he’s aware of. B&B viewers know that Liam found an earring on the bed in the Bill’s secret sex room. Bill told Liam not to bring it up with Katie because she’d be embarrassed.

Since Katie is relaying her suspicions, Liam might decide to come clean. Regardless, Liam will promise to keep an eye on Bill moving forward. He’ll vow to tell Katie if he feels something is going on.

In return, Katie will probably monitor Steffy and Wyatt’s (Darin Brooks) marriage. Maybe Katie will tell Liam if there are issues between the newlyweds. If Liam learns there’s even a glimmer of hope, he’ll pounce on his chance in a heartbeat.

Steffy is holding tight to her commitment at the moment. Liam may not get his shot for quite some time. Things are obviously going downhill for Bill and Katie. Threats will get tossed around later this week. If Liam is forced to give up and Katie’s relationship crumbles, where could that lead?

There’s been some buzz about the idea of Katie and Liam getting together. When Liam hooked up with Quinn (Rena Sofer), it opened the door to more pairing opportunities. It appears B&B is trying to get creative when it comes to Liam and his group.

It can get monotonous when Wyatt and Liam continually cycle through the same women.

The tired triangle is old news.

With that in mind, could Liam and Katie become a hot new item? They might make a good match. Liam feels betrayed by his brother and Katie feels betrayed by her sister. They could seek comfort in each other if their battles end in defeat. This could be a one-night stand or something more.

Either way, it would be an interesting move.

If The Bold and the Beautiful takes this route, Bill would have to deal with his own son dating his ex. Of course, there’s always the possibility that Katie could cheat before the marriage is over. It might be retaliation for Bill’s latest fling. Liam and Bill have been facing some conflict lately.

If Bill got updates on Liam and Katie’s sexcapades, it would create even more strife.

A Liam and Katie pairing might spark some jealousy from Steffy as well. Steffy wanted Liam to move on, but how will she feel when it really happens? Voice your opinion in the comments below and don’t forget to check CDL often for the latest Bold and the Beautiful spoilers, updates and news.