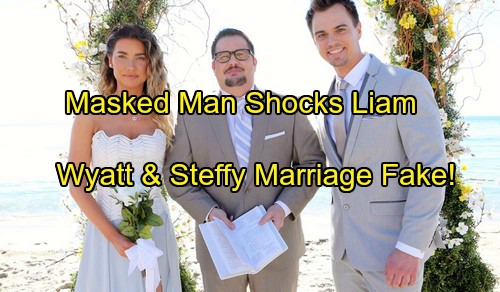 “The Bold and the Beautiful” (B&B) spoilers tease that Liam (Scott Clifton) is in for another shock on next week’s episodes. This poor man has been through so much thanks to Quinn (Rena Sofer), but it looks like even more chaos is headed his way. A masked intruder will catch Liam by surprise at the beach house. Liam will wake up to find this disguised invader standing nearby.

According to B&B’s summer preview, this bizarre incident could change everything. When Wyatt (Darin Brooks) hears about this encounter, he won’t be sure his marriage to Steffy (Jacqueline MacInnes Wood) is still valid. Wyatt may start to panic if he realizes he didn’t legally tie the knot.

Could all of this mean that Reverend Rydell (Chaz Bono) isn’t who he claims to be? Perhaps he isn’t a real reverend or he’s actually the reverend’s evil twin. Something soapy is obviously going on. We may get a wild explanation.

We know that Chaz Bono has taped more appearances for “The Bold and the Beautiful.” In fact, Bono will be live-tweeting with Scott Clifton and Darin Brooks during the episode airing on June 10. The timeline of this adds up. Liam will face the masked intruder on June 9, so it makes sense that it will be the show’s cliffhanger.

Then, Liam could unmask the intruder and deal with the fallout in the next day’s episode. Since Wyatt is friends with Reverend Rydell and secured him for the ceremony, he’ll undoubtedly get updates on this soon. Of course, we have to wonder why this guy might be breaking in with a disguise on.

What could this potentially fake reverend be up to? It’s tough to say. He may have an agenda of some sort or maybe he’s just crazy. Whatever the case, it should be interesting to see where this is headed. Stick with “The Bold and the Beautiful” to find out who the intruder is and how it will affect Wyatt’s situation.

So B&B fans, what do you think about the news that someone will invade the beach house while wearing a mask? Could this be Reverend Rydell? If he’s not a real reverend, what will that mean for Wyatt? Will Steffy ditch him if she’s no longer trapped in their marriage?