The Bold and the Beautiful (B&B) Spoilers: Nicole Gets Too Close to Rick After Zende Split, Steals Maya’s Husband? 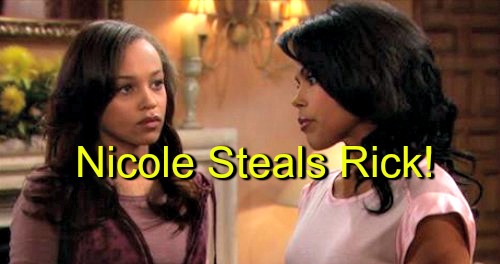 “The Bold and The Beautiful” (B&B) spoilers reveal that a heartbroken Nicole Avant (Reign Edwards) may soon cause problems for big sister Maya Avant (Karla Mosley) if she turns to Rick Forrester (Jacob Young) in the wake of her split with Zende Forrester (Rome Flynn).

Could Nicole split up Maya and Rick? Some might say that’s karmic payback for Maya wrecking Caroline Spencer’s (Linsey Godfrey) marriage with Rick. B&B fans have known ever since Maya enlisted Nicole to carry their baby that she was playing with fire.

The problem is, the baby is biologically Rick and Nicole’s – Maya has no part in it – which makes it easy for her to be cut out of the process. Zende already mentioned that it was hard for him to see Rick rubbing on Nicole’s belly and talking to his child she’s carrying.

If Maya is not already feeling a similar sort of jealousy, she will soon. The whole crux of the issue between Zende and Nicole was her baby bump. He couldn’t take touching her when she had another man’s baby growing inside her.

On the flip side, Rick likes touching Nicole because it is HIS baby growing inside her. Of course, he’s limited himself to rubbing the baby bump so far, but who thinks that won’t be the limit for much longer? Nicole is hurt by the Zende dumping and, no doubt, Rick will comfort her.

Maya will too, but it’s the Rick comforting that will be the problem. Rick holding Nicole may feel natural for both of them because it’s their baby between them. Will it be Nicole that reaches out first and kisses Rick because she’s feeling like less of a woman after Zende’s rejection?

Will Rick respond but then stops himself because he loves Maya? And how long before Rick comes back because he can’t stay away. After all, with Maya and Nicole being sisters, isn’t Nicole a younger and improved model of Maya since she can carry his child and Maya can’t?

This is all heading for a big mess. No doubt Julius Avant (Obba Babatunde) will take Nicole’s side in this, even if she decides to steal Rick from Maya. After all, as long as Julius has one daughter (of the ones he acknowledges…) with a wealthy important man, that’s good enough for him.

Julius barely tolerates Maya and her lifestyle choices so he would probably prefer Nicole with Rick since he’s her baby’s father. Julius has disagreed with the surrogacy all along, but if Nicole can turn it from surrogacy into a husband and family, Julius would be there with pom-poms cheering it on.

But will Maya allow Nicole to take her man? Maya can be a dirty fighter when she needs to be – the kindler, gentler Maya we see now is drastically unlike her usual self… We also have to wonder if Nicole takes Maya’s man, will that lead to a new partnership for Maya?

Would Sasha Avant (Felisha Cooper) reveal herself to Maya as a secret sister if both Nicole and Julius turn on Maya? Sasha is already Julius’ least favorite. If Julius also rejects Maya in favor of Nicole, it would make sense for the two black sheep Avants to conspire against their family.

What do you think B&B fans, will Nicole split Rick and Maya? Will Maya team up with Sasha against the Avants? What Avant family drama do you expect to erupt from Nicole’s split with Zende? Share your comments below and check back with CDL often for more “The Bold and The Beautiful” spoilers.