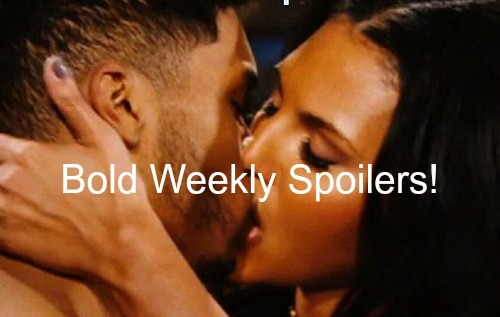 “The Bold and The Beautiful” (B&B) spoilers for the week of Monday February 29 thru Friday March 4 episodes. We’ll see more of Quinn and Liam this week – with Deacon thrown in for spice. Plus, we’ll have more on Sasha and Zende – and Steffy and Wyatt. Here’s what to expect.

Now that Zende Forrester (Rome Flynn) and Nicole Avant (Reign Edwards) have split, it’s time for Sasha Avant (Felisha Cooper) to make her move – and that’s exactly what she does this week. While Zende is preoccupied with the fresh break up, Sasha acts as a major temptation.

Sasha now knows that Zende has no reason to her down. Sasha starts out flirty with Zende but then gets much more aggressive with her overtures. Zende is very tempted and they’ll share a steamy kiss, but will it go further than that? Will Sasha finally get what she wants from Zende?

Bold and Beautiful spoilers tell us that Liam Spencer (Scott Clifton) wants answers and Quinn Fuller (Rena Sofer) isn’t giving him what he wants. This frustrates Liam who is already muddled. Liam believes that Quinn is keeping things from him while she tells him their “marriage” has never been better.

Liam starts digging for answers. To help keep Liam with her, Quinn has now enlisted Deacon Sharpe (Sean Kanan) into her scheme. Deacon agrees and, on the surface, it seems like he’s 100% in it for the cash, but is there more? Does Deacon want her back?

Does Deacon want to be on hand when it all comes falling down so he can move in and help her pick up the pieces? Deacon always has a couple of cons going… How far will they go? Will we see a sloppy photoshop album of wedding pics? Fingers crossed!

Wyatt Spencer (Darin Brooks) also wants answers and he wants them from Steffy Forrester (Jacqueline MacInnes Wood). Wyatt has a couple of things in mind. First, he’s considering a career change. Is he serious? Is Wyatt thinking of not working with his mom anymore?

Wyatt also wants an answer from Steffy on his proposal. Anyone notice she’s still been wearing her engagement ring from Liam? That has to mean something. Steffy will make a stunning announcement this week – is it that she said yes to Wyatt?

Bill Spencer (Don Diamont) wants Katie Logan (Heather Tom) to get help before their marriage is ripped apart. Katie knows she needs to deal with her anger issues towards Bill and Brooke Logan (Katherine Kelly Lang).

Chris McKenna will make his B&B debut this week as Dr Hayden, Katie’s shrink. Katie talks to the good doc about the Bill and Brooke issues. Later in the week, Bill and Katie will have a serious talk about the fate of their marriage.

One of the B&B families gets news this week that they didn’t see coming. Late in the week, Nicole will also have regrets about her split with Zende, but it looks like there may be no going back if Sasha has her way.

All this goes down in episodes during the the week of Monday February 29. Watch B&B every day then come back to CDL for more “The Bold and The Beautiful” spoilers and news.