BY Heather Hughes on May 20, 2016 | Comments: 2 comments
Related : Soap Opera, Spoiler, Television, The Bold and the Beautiful 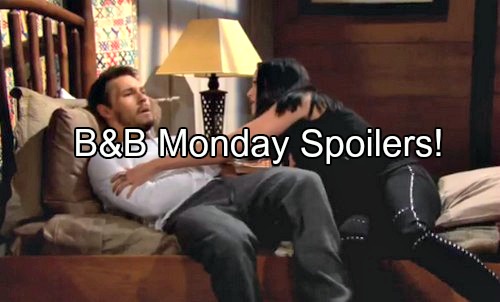 “The Bold and the Beautiful” (B&B) spoilers for next week’s episode Monday, May 23, tease that Liam (Scott Clifton) will open up to Bill (Don Diamont) about the crazy ordeal he went through. He’ll point out that he really thought he was Quinn’s (Rena Sofer) adoring husband, Adam. Liam is still struggling to believe that Quinn would go that far.

Bill will insist that Liam just needs to focus on pressing charges and making Quinn pay for what she’s done. Elsewhere, Wyatt (Darin Brooks) will have a chat with his mother. He’ll once again voice his displeasure about everything Quinn did to Liam.

B&B spoilers reveal that Quinn will suggest she did it all for Wyatt. She just wanted him to have a chance with the woman he was meant for. Quinn was convinced that Steffy (Jacqueline MacInnes Wood) and Wyatt belonged together.

When Quinn saw her opportunity to make it happen, she grabbed it. Now Quinn is facing an uncertain fate. Wyatt will start to connect with Quinn again and he’ll try to step up for her. Quinn needs serious help and she may not get it if she’s in prison. The Bold and the Beautiful spoilers say that Wyatt will push for psychiatric treatment instead.

Meanwhile, Sasha (Felisha Cooper) will try to get Julius (Obba Babatunde) in her corner. “The Bold and the Beautiful” spoilers say Sasha will propose a deal that might benefit them both. She’ll need Julius’ assistance if she plans on getting Nicole (Reign Edwards) to back off Zende (Rome Flynn).

Of course, we have to wonder what’s in this for Julius.

Perhaps Sasha will offer to help Julius reunite with Vivienne (Anna Maria Horsford) or vow to stay out of his hair if he grants her request. Besides, Sasha will feel like her father owes her. Julius spent years sweeping Sasha under the rug. She’ll think this is the least he could do.

We know Julius likes to keep secrets. Will he soon have something else to hide? Nicole may never forgive Julius if his manipulation costs her a future with Zende. Stick with “The Bold and the Beautiful” for updates on what’s in store for the Avants.

So B&B fans, what do you think about Bill and Liam’s chat? Will Liam be tempted to make Quinn pay? What about the news of Sasha’s proposition? Will Julius take Sasha up on her offer?