The Bold and the Beautiful (B&B) Spoilers: Quinn Plans Double-Murder As Steffy Bails on Wyatt – Steffy and Liam Lives in Danger 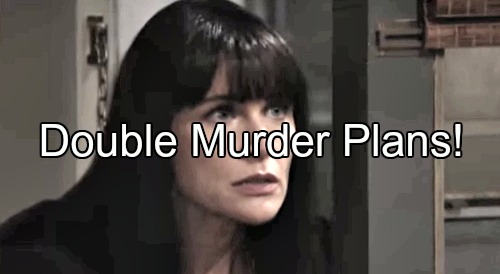 “The Bold and the Beautiful” (B&B) spoilers tease that Quinn (Rena Sofer) will soon have a plot in motion. The wheels are turning in that mischievous mind. There’s always something cooking when it comes to Quinn.

Quinn believes Steffy (Jacqueline MacInnes Wood) is the perfect match for Wyatt (Darin Brooks) and she intends to do everything she can to make sure their marriage stays intact. If that means going after her former flame, then so be it. The love Quinn had for Liam (Scott Clifton) seems to have fizzled and that means he should be afraid…VERY afraid.

How far will Quinn go to keep Liam from messing up Wyatt’s relationship? Quinn might be willing to attempt a murder. It wouldn’t be the first time Quinn thought about killing Liam and it probably wouldn’t be the last.

We could see another showdown between these two, but Quinn might opt for weapons over words during their next faceoff.

Of course, “The Bold and the Beautiful” spoilers say something will come up that makes Wyatt doubt the validity of his marriage. If B&B tears Steffy and Wyatt apart through a legal loophole, then we could be dealing with an interesting situation.

It might cause Quinn to make some updates to her strategy.

Quinn currently views Steffy as a great catch for her son, but what will happen if Steffy bails on Wyatt? This mama bear might seek revenge. Perhaps Quinn will carry out an evil scheme involving both Steffy and Liam. This could mean bad news for all parties involved.

Can’t you just imagine Quinn tying them up and preparing to torture them somewhere? Quinn may suggest that Liam and Steffy can be together forever. ‘Til death do them part! It might allow Wyatt to be the hero again and save both of them.

He could finally realize that his mother doesn’t deserve all of these chances he keeps giving her.

Then again, Steffy or Liam could manage to gain the upper hand. Many “Bold and the Beautiful” fans have been wondering where the show can really take Quinn from here. If Quinn continues to go down this path time and time again, how much longer will they let her roam the streets?

There may come a day when Quinn will pay the ultimate price for her actions. Someone like Steffy, Liam or even Wyatt may be forced to kill Quinn in self-defense. Quinn is a fantastic character who adds a lot of drama to the CBS soap. It would be a shame to see Rena Sofer get the boot, but Quinn may be written into a corner at some point.

There’s only so much havoc one woman can wreak.

What do you think B&B’s plans are for Quinn? Will she try to murder Liam? Will Steffy face Quinn’s wrath later on? Could Quinn end up getting herself killed eventually?