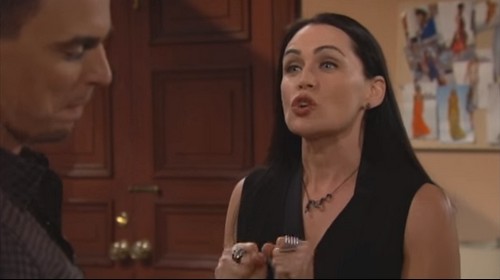 “The Bold and the Beautiful” spoilers for Monday, February 1, tease that Quinn (Rena Sofer) will want updates on Wyatt’s (Darin Brooks) pursuit of Steffy (Jacqueline MacInnes Wood). At the office, Quinn will demand to know if Wyatt is winning Steffy over.

Wyatt will admit that they’ve been bonding. Quinn will be delighted by the news. She’ll point out that Steffy is much better off with Wyatt than she was with Liam (Scott Clifton).

However, Wyatt will remind Quinn that Steffy is struggling to move on. He’ll think they need to take this slow. Quinn will brush off the idea and insist that Wyatt needs to step up his game. “The Bold and the Beautiful” spoilers say Quinn tell Wyatt to stop dragging his feet. She’ll want Wyatt to secure his future with Steffy because he doesn’t know how long Liam will be off the grid.

Speaking of Liam, it looks like Quinn is still keeping him as her pet project. Things are bound to get interesting as Quinn weaves her tangled web. Later this week, B&B viewers can expect Liam to be puzzled when Quinn tries to explain their history. Naturally, Quinn will put her own spin on their troubled past.

It’s clear that Quinn will do whatever it takes to help Wyatt seal the deal with Steffy. That means keeping Liam out of the picture for as long as possible. Meanwhile, Steffy’s feelings for Wyatt will begin to grow. She’ll mention that Ivy (Ashleigh Brewer) had to be out of her mind to let Wyatt go.

Steffy has been so grateful to have Wyatt by her side throughout this whole ordeal with Liam. Nevertheless, Wyatt will face doubts from someone and he’ll defend the plays he’s been making. Perhaps Thomas (Pierson Fode) will be concerned about Wyatt ditching Steffy if a problem arises. Steffy is already down about Liam dumping her. She can’t take another loss right now.

Wyatt will be adamant that he’s not Liam and he would never abandon Steffy. Wyatt will continue his goal of making Steffy feel better about the situation. You can expect some hot moments in the near future. Stick with “The Bold and the Beautiful” to see if Steffy will forget about Liam and give Wyatt her full attention.

So B&B fans, what do you think about Quinn’s satisfaction over her scheme? Will Wyatt rip into his mother when he eventually learns the truth? Will Steffy and Wyatt end up sleeping together before Liam can intervene? Voice your opinion in the comments below and don’t forget to check CDL often for the latest “Bold and the Beautiful” spoilers, updates and news.