The Bold and the Beautiful (B&B) Spoilers: Quinn Rapes Liam to Ensure Split with Steffy? 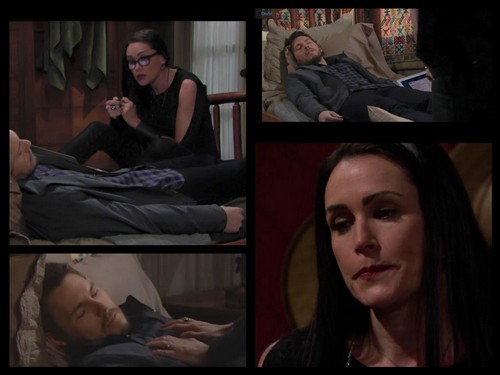 “The Bold and The Beautiful” (B&B) spoilers tease that mysteriously single Quinn Fuller (Rena Sofer) will stop at nothing to ensure that Wyatt Spencer (Darin Brooks) gets with Steffy Forrester (Jacqueline MacInnes Wood). Now that Quinn kidnapped Liam Spencer (Scott Clifton), will she sink into depravity to keep them split up?

Could Quinn take advantage of the unconscious Liam who’s obviously suffering with a head wound and confusion to rape him in his sleep (or set him up to be raped by someone else) so she can snap compromising photos to send to Steffy? Let’s consider…

Quinn has a history of breaking up relationships with naughty selfies – remember what she did to Bill Spencer (Don Diamont) by snapping a naked pic of them together and blackmailing Bill plus using it to get Ridge Forrester (Thorsten Kaye) to ruin Bill and Brooke Logan’s (Katherine Kelly Lang) wedding?

But would Quinn go so far as to sex up the brother of her son? While she did say there’s nothing like a Spencer man – and Liam is not related to her – it’s still sort of an icky thought. But Quinn is just the sort to engage in something like that. Quinn is deeply disturbed…

And if Quinn doesn’t want to do the deed with Liam herself, she could always bring in an outside “consultant” like a call girl to either get jiggy with an out of it Liam – or just pose for pics that Quinn can use against Liam and to further Wyatt’s romance with Steffy.

B&B spoilers indicate that next week, Quinn will send a text to Steffy from Liam that will send her over the edge and into Wyatt’s arms – is it a selfie of Liam with another woman? Will Quinn send that along with a message saying he’s moved on and she should too?

Quinn could always send a pic with Liam that shows her body but not her face so she doesn’t have to involve anyone else in her subterfuge. Whatever it is, Steffy will be devastated and Wyatt is there to help Steffy move on from Liam – and hopefully with him.

After this bold move, Quinn will have to cover her tracks and do something with Liam so she doesn’t end up arrested for his disappearance. Whatever it is, it looks like Liam will be traumatized as a result of Quinn’s scheming actions.

Liam is already dealing with head trauma but if he thinks he shagged his brother’s mom (or actually did) – Liam might go over the edge. This Spencer family storyline is a mess – and Quinn is pushing it to the extreme. But what will the fallout be and will Wyatt end up with Steffy or not?

Share your thoughts in the comments below on whether Quin will do something utterly naughty with Liam to help Wyatt seal the deal with Steffy – and check back with CDL often for more “The Bold and The Beautiful” spoilers and news.