BY Heather Hughes on January 16, 2016 | Comments: one comment
Related : Soap Opera, Spoiler, Television, The Bold and the Beautiful 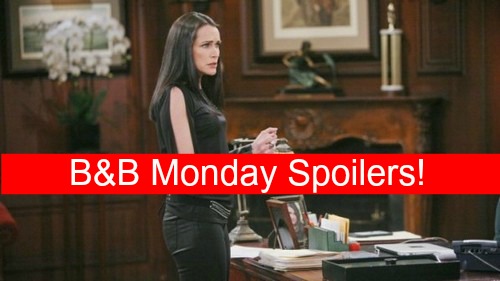 “The Bold and the Beautiful” spoilers for Monday, January 18, reveal that Sasha (Felisha Cooper) will try to process what she just overheard. As usual, eavesdropping resulted in a stunning revelation. Sasha now knows that Nicole (Reign Edwards) is to blame for Rick’s (Jacob Young) abrupt about-face.

Naturally, Sasha will feel like Nicole delivered a low blow. She thought they were friends, but it sure doesn’t look that way now. What kind of friend would deliberately knock Sasha out of her dream job? Of course, you could argue that Sasha hasn’t been a great friend either. After all, Sasha’s been flirting with Zende (Rome Flynn) from day one in Los Angeles.

Nevertheless, B&B spoilers tease that Sasha will be deeply hurt by Nicole’s sneaky scheme. Sasha will tearfully confess that she can’t believe Nicole doesn’t trust her around her boyfriend. Now that Nicole has derailed her gal pal’s dreams, Sasha may decide to live up to her bestie’s expectations.

If Nicole thinks she’s competing for Zende, maybe Sasha will rev up her efforts to win the contest. On the other hand, Nicole may have unintentionally taken herself out of the competition. By doing something so underhanded, she’s put her relationship with Zende in jeopardy all on her own.

Meanwhile, Zende will get some advice from Carter (Lawrence Saint-Victor) after they work out at the Sky Lounge. “The Bold and the Beautiful” spoilers say Carter will insist that Zende needs to be out there living his life and having a good time. Instead, Zende is caught up in a load of baby drama.

Carter’s words of wisdom could make Zende wonder if he made the right decision about Nicole. Zende chose to stand by Nicole through the surrogacy, but they’ve had nothing but problems since she found out she was pregnant. Once Zende hears that Nicole cost Sasha the modeling job, he may realize that all of this turmoil is just too much. Stick with “The Bold and the Beautiful” for updates on Nicole and Zende’s future.

So B&B fans, what do you think about the news that Sasha will be heartbroken by Nicole’s lack of trust? Will Sasha make a play for retribution? What about Carter’s advice for Zende? Will Zende decide he can’t make it work with Nicole? Voice your opinion in the comments below and don’t forget to check CDL often for the latest “Bold and the Beautiful” spoilers, updates and news.