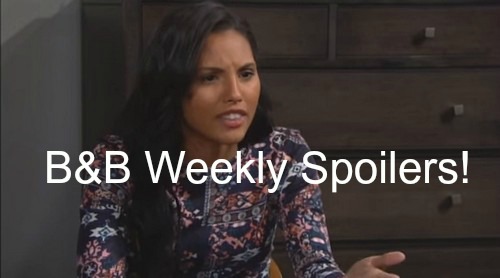 “The Bold and The Beautiful” (B&B) spoilers for the week of Monday January 18 through Friday January 22 indicate that Nicole’s betrayal of BFF Sasha will spark disaster for the Avants while Steffy and Wyatt get closer and Liam shakes up his life.

Now that Sasha Avant (Felisha Cooper) knows that it was Nicole Avant (Reign Edwards) that got her axed from Forrester Creations, she’s reeling. We’ll see Sasha go to someone’s office at Forrester and tell them Rick Forrester (Jacob Young) pulled the job offer.

Is it Nicole that Sasha is telling to give her BFF one last chance to come clean about her betrayal? No way will Nicole tell the truth. Rick assured Nicole that he rescinded the offer in a way that won’t tie back to Nicole, but no one at FC can close the darned door when they talk about shady stuff…

Sasha is devastated that her dreams are crushed and she’ll turn to her dad Julius Avant (Obba Babatunde). But does Julius act like a good father? Heck no. That man is a grade A tool when it comes to how he treats Sasha.

Sasha cries to Julius that Nicole felt threatened over Zende Forrester (Rome Flynn) and got Rick to take back the job offer. Looks like Sasha is hoping her dad will do the right thing for once and take her side – especially when Nicole is so blatantly in the wrong.

But no – Julius does the worst thing in the world. He tells Sasha to go back to Chicago “where she belongs.” Ouch. Talk about insult to injury. Now Sasha has nothing to lose. Why does Julius think he can keep treating Sasha like a dog and she won’t ever bite back?

Sasha is not ready to give up on LA and knows she’s got to make her own breaks. Look like Sasha will tell Zende that it was Nicole who got Rick to take back the job offer. For Zende this hits hard because it’s not just Sasha’s career that Nicole’s messing with, but his too.

Zende is fresh off a conversation with Carter Walton (Lawrence Saint-Victor) where Carter tells him that he should not be dealing with the hassle of Nicole’s baby drama and her jealous antics. Carter doesn’t like the way Nicole is being territorial yet very selfish.

Carter tells Zende that he’s a healthy young man and should be living his life not waiting while Nicole does her thing. This will all amp up when Sasha fills Zende in on Nicole’s betrayal. Ironically, Nicole getting Sasha fired to keep her away from Zende will push Zende and Sasha together.

Also, Sasha almost shared some of her backstory with Zende since he’s adopted and kind of gets it. Will she unload the big, ugly Avant family secret on Zende? Fingers crossed she will! Zende will question how selfish Nicole is being and how she’s not the decent person he thought she was. Break up looming!

Meanwhile, Steffy Forrester (Jacqueline MacInnes Wood) is clueless that Liam Spencer (Scott Clifton) saw her in bed with Wyatt Spencer (Darin Brooks) and that’s why he dumped her. She’s upset about the split and Wyatt, of course, is there to keep on comforting her.

Look for Liam to really shake up his life in the wake of breaking off the engagement. Looks like he’s going to move in with Bill Spencer (Don Diamont), leave Forrester Creations for good, and totally rewrite his life. Will Steffy ever get a chance to explain?

The bottom line is this is just one more circumstance where Steffy did something she shouldn’t and came out looking worse than what she really did. She should not have let a half-naked Wyatt curl up in bed with her. Duh.

Also, B&B spoilers indicate that Liam may have knocked his noggin harder than he realizes when he fell in the airplane bathroom and may not be thinking clearly. Wyatt won’t waste any time moving in on Steffy while his mom Quinn Fuller (Rena Sofer) does all she can to keep Liam out of the way.

All this and more next week on B&B – watch then come back to CDL every day for more “The Bold and The Beautiful” spoilers, news and update.