‘The Bold and the Beautiful’ Spoilers: Steffy and Liam Pulled Apart for Wyatt’s Sake – Quinn Orders Ivy to Aid Her Twisted Plot 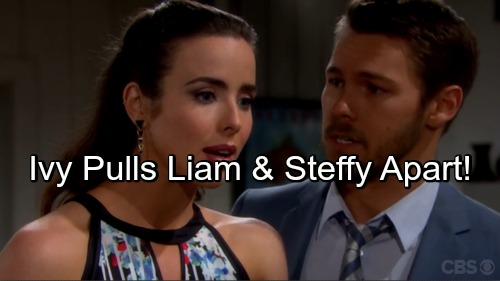 The Bold and the Beautiful (B&B) spoilers tease that Ivy (Ashleigh Brewer) will plan on making some changes in her life. She knows she made many mistakes last year, but she’s ready for a new beginning. Ivy will hope that Quinn (Rena Sofer) can sense her attitude adjustment as well as her potential. She could once again be a valuable part of Forrester Creations.

Quinn will have much more than jewelry on her mind. She has a lot at stake at the moment. Eric (John McCook) is in love with Quinn, but their relationship isn’t exactly on solid ground. How could it be when the Forrester empire is crumbling before their very eyes? The division within the company could lead to additional drama and major losses.

Quinn could use an ally to help her through the madness. Luckily, she’ll find one in Ivy. B&B spoilers indicate that Ivy will vow to remain loyal to Quinn. She’ll be Quinn’s trusty sidekick in the coming weeks.

When Quinn says jump, Ivy will ask how high. Quinn should enjoy having a right-hand woman who’s offering her full support. Ivy will stand together with Eric and Quinn as they battle the rest of the family. She’ll may also have to help out with a plot to benefit Wyatt’s (Darin Brooks) love life.

The Bold and the Beautiful spoilers say Quinn will realize that she needs to keep Liam (Scott Clifton) from winning Steffy (Jacqueline MacInnes Wood) over. No one really thought Quinn would turn from her evil ways. She’s a schemer and she always will be.

Quinn knows Wyatt will lose Steffy if Liam has anything to say about it. She’ll come up with a way to stop the former flames from reigniting their love. That’s where Ivy might be asked to pitch in. Ivy and Liam are still friends. Could Ivy be sent to stir the pot?

Ivy tends to push Steffy’s buttons. It would be easy for Ivy to create some conflict. With any luck, Ivy could drive a wedge between Liam and Steffy. She could make them believe that they’re no longer right for each other.

Steffy and Liam have both grown as a result of their struggles. If Ivy manages to plant a few seeds of doubt, Steffy could come crawling back to Wyatt. On the other hand, Ivy might be urged to cozy up to Wyatt instead. Nothing makes Steffy want a man more than seeing him with another woman.

Jealousy could pull Steffy in Wyatt’s direction. Let’s just hope Quinn doesn’t ask Ivy to pursue Liam for herself. That could end in disaster. It would probably just make Steffy determined to get Liam back. Plus, Liam’s wishy-washy side would inevitably return. Liam “The Waffler” Spencer could suddenly find himself torn between Ivy and Steffy again.

Of course, Steffy would likely emerge victorious. Liam would give his “It’s you…it’s always been you…” speech and they would happily reunite. What then? Would Quinn cause another storm? Could a recast of Hope appear to put Liam back in waffle mode?

The Bold and the Beautiful will have some interesting possibilities down the road. For now, Quinn and Ivy need to focus on “Operation Save Wyatt’s Marriage.” We’ll give you updates as other news emerges on this dangerous duo. Stay tuned to B&B and don’t forget to check CDL often for the latest Bold and the Beautiful spoilers, updates and news.