BY Monica DelRay on May 12, 2016 | Comments: 3 comments
Related : Soap Opera, Spoiler, Television, The Bold and the Beautiful 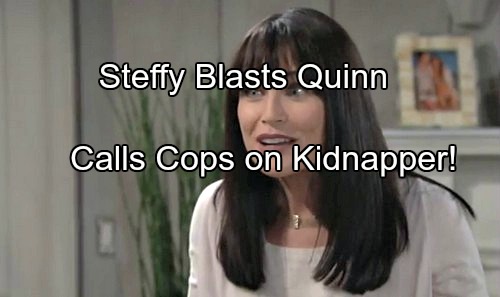 “The Bold and the Beautiful” (B&B) spoilers for tomorrow’s episode, Friday, May 13, tease that Ridge (Thorsten Kaye) will wait for updates on what Caroline (Linsey Godfrey) and Thomas (Pierson Fode) decided. He’ll hope that Caroline has settled Thomas down and brought him around to their way of thinking.

However, the possibility of a scandal will weigh heavily on Ridge’s mind.

B&B spoilers indicate that Ridge will open up to Eric (John McCook) about a potential threat. Eric will point out that he’s taken this family through his share of scandals, too. Ridge will reply, “Like father, like son.” They’ll talk about their bond and Ridge will mention that it’s not always about blood.

Sometimes it’s just about being there for your child.

Of course, Rick (Jacob Young) has a much different perspective. He feels like Ridge has stolen his birthright and he intends to get it back. Thomas has agreed to stay quiet about Douglas’ paternity, but we’re willing to bet Rick is going to cause trouble.

There’s a good chance Rick will expose the truth to everyone when he hears the shocking news.

In the meantime, Steffy (Jacqueline MacInnes Wood) will deal with a shock as well. Quinn (Rena Sofer) will show up to ask for help, but she’ll get an earful instead. “The Bold and the Beautiful” spoilers say Steffy will blast Quinn for what she did to Liam (Scott Clifton).

She won’t be happy about how Quinn’s deception affected her own life either.

Steffy will state that she meant her vows to Wyatt (Darin Brooks), but she never would’ve said them if it weren’t for Quinn. Elsewhere, Wyatt and Liam will get into another shouting match over Steffy. Wyatt will argue that Quinn’s involvement changed nothing. He’ll believe this is exactly how everything would’ve worked out anyway.

Keep telling yourself that, Wyatt.

Back with Quinn and Steffy, they’ll debate which Spencer brother was the best choice. Quinn will insist that Liam isn’t right for Steffy and she’s finally figured it out. Steffy will eventually get fed up and call the cops. She won’t allow Quinn to get off scot-free.

Stick with “The Bold and the Beautiful” to watch Quinn get sent to the slammer.

So B&B fans, what do you think about the scandal that’s looming? Will Rick blow everything for Ridge? What about Steffy and Quinn’s quarrel? Would Steffy really have married Wyatt without Quinn’s manipulation?