‘The Bold and the Beautiful’ Spoilers: Steffy Moves Out, Threatens To Divorce Wyatt If Quinn Doesn’t Dump Eric 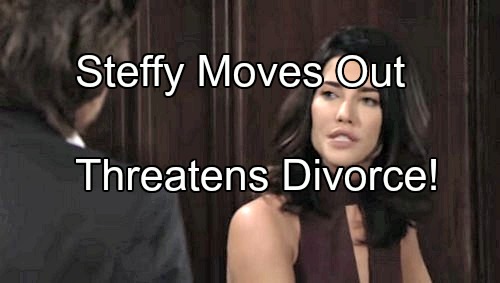 The Bold and the Beautiful (B&B) spoilers tease that Quinn (Rena Sofer) won’t be willing to give up Eric (John McCook). Quinn feels like she finally has it all. She’s got love, money and great power. What more could a schemer like Quinn want? Despite Wyatt’s (Darin Brooks) orders, Quinn just won’t agree to walk away.

Wyatt will be outraged by Quinn’s decision. Normally, Quinn at least pretends to go along with her son’s rules. Not this time! Quinn will inform Wyatt that he’ll just have to work things out with Steffy (Jacqueline MacInnes Wood). She can’t let go of Eric and the many benefits he brings to her life.

While Quinn makes herself at home in the Forrester mansion, Steffy will move out of Wyatt’s house. She warned Wyatt that he’d have to control his mother and she wasn’t playing around. The Bold and the Beautiful spoilers say Wyatt will be stunned when Steffy packs up her belongings and leaves. She’s taking a stand this time.

Steffy will move in with Thomas (Pierson Fode) for the time being. Wyatt will probably mope around and try to come up with a way to fix this mess. However, the ball is in Quinn’s court. B&B spoilers reveal that Steffy will approach Quinn with an ultimatum. She’ll insist that she’s going to divorce Wyatt if Quinn doesn’t cut ties with Eric.

Wyatt can’t get through to Quinn and it’s tough to believe Steffy will change her mind either. Quinn might suggest that Steffy doesn’t truly love Wyatt if she’s willing to leave him over this. They agreed to love each other for better or for worse. Steffy should’ve known she’d only get the “for worse” part with Quinn as a mother-in-law.

Will Steffy break Wyatt’s heart because of Quinn’s actions? If so, that seems a little unfair. Wyatt isn’t the one who’s causing trouble. He’s been trying to find a solution to the problem, but his efforts keep failing.

Then again, perhaps Steffy has earned the right to be somewhat selfish here. Quinn sabotaged Steffy and Liam’s (Scott Clifton) relationship. She took advantage of their disagreement and Liam’s medical condition. Steffy wouldn’t have tied the knot with Wyatt without Quinn’s intervention.

Since this whole marriage was based on deception, Steffy deserves the opportunity to pick the man she really wants to be with. Liam is certainly hoping Steffy will dump Wyatt once and for all. With any luck, Steffy might be in his arms soon enough.

Of course, there are plenty of ways this reunion could be derailed. The Bold and the Beautiful will surely give us a shocker or two. Steffy might learn she’s pregnant with Wyatt’s baby. If not, Quinn could get to work on a revenge plot. Liam and Steffy could both go down.

Bottom line, there’s some intense drama in Steffy’s future. We’ll give you updates as more news emerges. Stay tuned to B&B and don’t forget to check CDL often for the latest Bold and the Beautiful spoilers, updates and news.