‘The Bold and the Beautiful’ Spoilers: Thomas and Sasha Flirty Fun – Will Brooke Accept Bill’s Offer and Get Married? 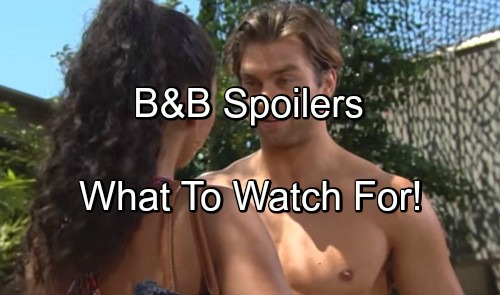 The Bold and the Beautiful (B&B) spoilers for Friday, August 26, tease that Katie (Heather Tom) will have some concerns about Ridge’s (Thortsen Kaye) new plan. Katie tried to get her hands on Bill’s (Don Diamont) shares in Forrester Creations, but he just wouldn’t budge. She knows there’s no way Bill will put them in the divorce settlement.

As a result, Ridge has shifted his strategy. He sent Brooke (Katherine Kelly Lang) to try her luck with her admirer. The Bold and the Beautiful spoilers say Katie will offer a warning about this scheme. She’ll state that Bill and Brooke are going to get together if Ridge isn’t careful.

Related: Is Wyatt A Hypocrite – Vote In Our Poll!

Katie understands what a despicable man they’re dealing with. She’s grateful to be getting rid of Bill. Katie will wonder if Ridge really wants to let Brooke to get caught in Bill’s web. It’s worth pointing out that Ridge has been bonding with Brooke lately. He may decide he wants Brooke for himself in the near future.

Regardless, Katie will think this is a bad idea. Ridge will maintain that Brooke can handle this. He’ll have faith that Brooke can secure the shares without falling prey to Bill’s manipulation. Unfortunately, Ridge might be underestimating Bill’s sneakiness.

B&B spoilers say Bill will realize that Brooke has an ulterior motive for coming over. He’ll suggest that Ridge must’ve urged Brooke to drop by and talk about his shares in the company. Bill won’t be happy about Ridge’s continued scheming, but he’ll think two can play that game.

Bill will turn on the charm and make sure Brooke knows how much he loves her. He’ll revisit his desire to make Brooke is wife. Brooke won’t be receptive to the marriage offer, but Bill will sweeten the pot. He’ll argue that they can both get what they want.

Bill can’t stand the thought of living without Brooke by his side. He’s confident that Brooke would appreciate their life together. Bill just wants Brooke to him a chance. If she agrees, Bill will be willing to throw in the shares. He’ll hand over control just as soon as they tie the knot.

Brooke will believe Bill is asking a bit much. She’s trying to help Ridge get the holdings, but does she want them that bad? Of course, Brooke certainly has feelings for Bill. Maybe this deal isn’t so bad after all. It seems Brooke will have to weigh the pros and cons before she makes her choice.

Other Bold and the Beautiful spoilers indicate that Thomas (Pierson Fode) and Sasha (Felisha Cooper) will have another flirty and fun afternoon. Sasha will joke that Thomas is going to get her fired with all of this mischief. Thomas will assure Sasha that he’s got her back. They’ll enjoy playing around and getting to know each other even better.

Sasha and Thomas are inching toward a real romance. Things could get tricky once Caroline (Linsey Godfrey) returns. We’ll give you updates as more news comes in. Stay tuned to B&B and don’t forget to check CDL often for the latest Bold and the Beautiful spoilers, updates and news.