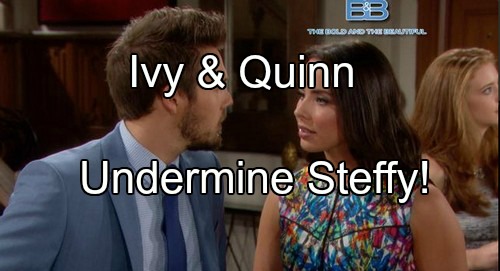 The Bold and the Beautiful (B&B) spoilers tease that Ivy (Ashleigh Brewer) is headed back to town. After facing a series of terrible accidents, Ivy departed for Australia. She was fed up with all of the Steffy (Jacqueline MacInnes Wood) drama and needed some time to herself. Plus, Ivy didn’t particularly want to sit around and pine for Liam (Scott Clifton).

Ivy enjoyed a lengthy stint away from Los Angeles, but she’s about to return with a renewed determination for success. The Bold and the Beautiful spoilers say Ivy will hope that she can get rehired at Forrester Creations. She’ll be ready to get back to the old grind and start designing some great jewelry.

Ivy will have to catch up on the latest gossip, too. The last time Ivy checked in, Steffy and Wyatt were engaged. Now they’re already on the verge of a divorce. Blink and you’ll miss a soap marriage!

Of course, the real shocker will be Quinn’s (Rena Sofer) relationship with Eric (John McCook). B&B spoilers state that Ivy will be stunned when she gets updates on this romance. Unlike pretty much everyone else, Ivy will be supportive of their involvement.

Ivy undoubtedly has some ulterior motives here. First of all, she wants a job. She can’t express disapproval and expect to be welcomed back with open arms. That’s especially true since Eric is letting Quinn have free rein with the jewelry line. Ivy knows she needs to bite her tongue and back Quinn up.

Besides, Ivy can usually tolerate Quinn a little better than Steffy. Quinn once shoved Ivy in the Seine, but that was part of a scheme to delay Liam and help Wyatt (Darin Brooks) win Hope’s (Kim Matula) heart. It’s not like Quinn specifically targeted Ivy. She just happened to fit in Quinn’s plan. Now the ‘partners’ will undermine Steffy and both will be delighted.

Quinn was also responsible for exposing Ivy’s lingering feelings for Liam and halting her engagement to Wyatt. However, that was probably for the best. Ivy needed to find herself before she married Wyatt or pursued anyone else. When you look at it like that, Quinn did Ivy a favor.

In other words, Ivy and Quinn aren’t mortal enemies. They aren’t exactly friends either, but maybe they’re about to find their happy medium. A sneaky alliance might be the perfect fit for Quinn and Ivy.
The Bold and the Beautiful buzz hints that Quinn will come up with a new plot.

She may need Ivy’s help to pull it off. Quinn wants to continue her “I’ve changed” charade for Eric’s benefit, which means Ivy might have to do some of her dirty work. Ivy might be OK with that. There should be some perks if Ivy decides to partner with Quinn.

Will Ivy play a role in keeping Liam and Steffy apart? It’s possible. Ivy might hope to work her way up the corporate ladder thanks to Quinn’s support. She may even wonder if she could get another chance with Liam.

Regardless, Ivy won’t be back to twiddle her thumbs. She’s obviously returning for a reason and it could lead to trouble. We’ll keep you posted as more news emerges. Stay tuned to B&B and don’t forget to check CDL often for the latest Bold and the Beautiful spoilers, updates and news.