The Bold and the Beautiful (B&B) Spoilers: Thomas Makes a Play for Caroline and Baby After Paternity Reveal 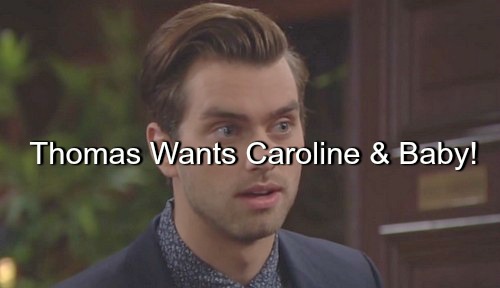 “The Bold and The Beautiful” (B&B) spoilers indicate that Thomas Forrester (Pierson Fode) may soon move in on his father Ridge Forrester’s (Thorsten Kaye) wife Caroline Spencer (Linsey Godfrey) – and the baby paternity is the prime motivator.

Thomas and Caroline recently shared some warm bonding time as he told her how disgusted he is by his womanizing ways and how committed he is to making a change. You could clearly see this had a profound effect on Caroline.

It was easier for Caroline to go along with Ridge’s scheme to hide her baby’s paternity from bio-dad Thomas and believe it when Ridge said Thomas does not want a kid and is nothing but a playboy moving thoughtlessly from woman to woman.

But now, Caroline can see that Thomas is genuinely regretful and heartfelt. Not only is he mending his ways, but he spelled out for Caroline that she was NOT just a casual conquest. You’ll recall he told her that he cares about her.

Plus, with Thomas taking Caroline to the ER about her baby, she got to sample what it would be like to have Thomas at her side. Thomas clearly is ready for a grown-up relationship, commitment and a family and told Caroline as much.

Plus, let’s face it, Thomas is young and hot and Ridge is a middle-aged meddler. Thomas told Caroline that he digs her, but respects that she’s married to his dad. But the paternity reveal is inevitable and that will change everything.

The only question is whether Thomas will find out in time to be present at the birth of his son – or if he’ll find out after the fact. Plus, we know when the truth comes out, Thomas will put all the blame on his father – and that’s fair.

Ridge has been the one pressing to keep this secret from Thomas. When Ridge finds out the baby is a boy, he’ll likely be even more insistent that Caroline keep lying to Thomas. Ridge wants another chance at raising a son in his own image since he thinks Thomas is a failure.

But how long can Caroline hold out before she blabs the truth to Thomas? Will he learn directly from Caroline or will he overhear Caroline and his father talking? No matter how he finds out, B&B spoilers indicate Thomas will want both his son and Caroline.

When Thomas outright pursues Caroline after the baby reveal, Ridge may find few allies to defend his lying actions – most might even say it’s karmic that Ridge would lose his wife and the child he tried to steal from his son.

This scenario sets up a major and ongoing rivalry between Ridge and Thomas – – just as Ridge is also about to launch on offensive against Rick Forrester (Jacob Young) over the Forrester mansion and who is in control of the family.

Can Ridge fight a war on both fronts? Will Caroline crack and tell Thomas she’s carrying his child? How long before Thomas finds out he’s got a son on the way? B&B spoilers indicate this will unfold to some extent in February sweeps but may not be resolved until the next round of sweeps in May.

What do you think B&B fans? Does Ridge deserved to be dumped for lying to his son? Or was he right to keep it a secret since Thomas has been such a Lothario? Share your comments below and come back to CDL often for more “The Bold and The Beautiful” spoilers and news.