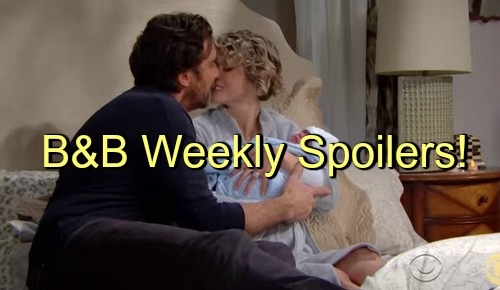 “The Bold and The Beautiful” (B&B) spoilers for episodes for the week of Monday March 7 to Friday March 11 reveal baby news, confrontations, dire warnings from Deacon and lots of advice to Steffy about her relationship drama.

First, the war between Rick Forrester (Jacob Young) and Ridge Forrester (Thorsten Kaye) heats up. But what starts as a fiery business conversation devolves into a screaming match between the warring brothers and vicious personal attacks.

While Ridge is dealing with his angry brother, Caroline Spencer (Linsey Godfrey) starts to get pains that frighten her. Thomas Forrester (Pierson Fode) finds Caroline in distress at the Forrester mansion and they realize she’s going into labor.

The Bold and the Beautiful spoilers tease that things are set up for a home birth, so Thomas gets her settled and is by her side while Ridge is notified to come home. Ridge won’t like seeing Thomas beside his baby mama given the secret they’re keeping. However, it may not be secret much longer!

Eric Forrester (John McCook) proudly makes a big deal about Caroline and Ridge’s baby being born at the house, not knowing it’s his great-grandson on the way. Ridge is ready to play proud papa but he pushed Rick too far in their last argument and now Rick wants revenge.

Rick fumes to his mom Brooke Logan (Katherine Kelly Lang) about Ridge’s high-handedness and Brooke let slip a very important fact – that Ridge had a vasectomy. That lets Rick know the baby can’t be Ridge’s and must be Thomas’ child.

Meanwhile, B&B spoilers warn that Ridge and Thomas are annoyed with each other. Thomas thinks his father is being dismissive and a jerk. Rick talks to Eric about Ridge and makes snarky comments about how involved Thomas has been in the pregnancy to amp up the drama.

Rick tells Eric that he’s going find out some things about Ridge soon… Will Rick reveal the truth to the family about the Thomas paternity secret or use it to leverage Ridge out of his way at Forrester? No doubt Maya Avant (Karla Mosley) will have some advice! 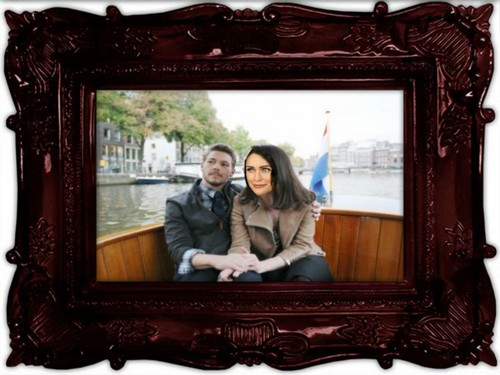 Bold spoilers tease that it looks like Deacon Sharpe (Sean Kanan) used Steffy-Liam photos and replaced Steffy’s face with Quinn’s. Will any of the photos trigger memories in Liam’s addled brain of him in those scenarios but with another woman?

Later in the week, Wyatt Spencer (Darin Brooks) and Steffy discuss Liam’s absence from their lives and how abruptly he disappeared. Also, Deacon is helping Quinn but warns her about the consequences she may face when this all blows up. Quinn doesn’t care.

Don’t miss any of the action going down on B&B the week of Monday March 7 thru Friday March 11 and come back to CDL every day for detailed daily “The Bold and The Beautiful” spoilers and news.