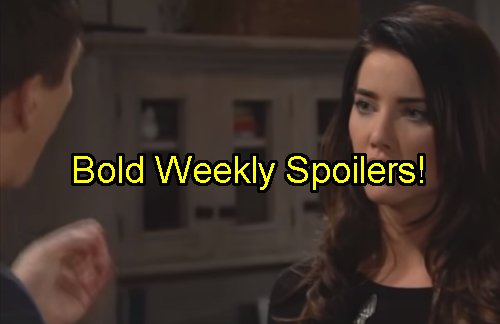 The latest The Bold and The Beautiful (B&B) spoilers for episodes the week of Monday, October 10 thru Friday, October 14 reveal that Wyatt has to make the ultimate choice, Ivy tries to trick Liam into romance, Eric leaves the hospital, and Sasha sees something shocking.

Steffy tries to romance Wyatt into keeping their dirty secret from Quinn Fuller (Rena Sofer) but will Wyatt finally man up and stand up to Steffy? Wyatt has to decide if he’s going to let his lovesick mom get screwed over or push back on his in-laws. B&B spoilers hint that Wyatt makes a big move. 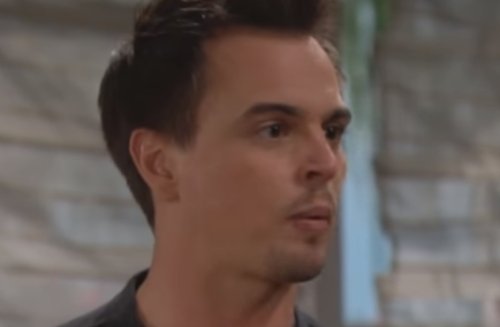 Rather than going directly to Quinn, Wyatt appeals to Ridge to do the right thing and tell the truth. This is the second time in recent months that Ridge has been caught red-handed telling a whopper of a lie. Will he finally come clean on the legal doc or will Wyatt be forced to spill the beans?

Looks like Ridge will finally cave because The Bold and The Beautiful spoilers tease that on Friday, Ridge makes an announcement that rocks Forrester Creations – does he admit to one and all that Quinn holds the fate of all of them in her hands? What will happen to Wyatt’s marriage after the reveal?

Eric is taken home to recuperate although he’s still out of it. DC Douglas guests as Dr Andrews and Jules Ford has a bit part as a home nurse as they get Eric settled in at the Forrester mansion to recover. Ridge is by his side, but that won’t last too long if Wyatt gets his way. 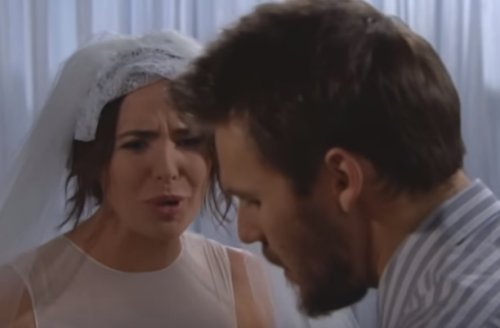 Ivy Forrester (Ashleigh Brewer) is playing mind games with Liam Spencer (Scott Clifton) by wearing Steffy’s wedding dress. Will Ivy tricking Liam work? Ivy’s new makeover has left her looking a lot like Steffy, so Liam might be tempted – or he might run screaming the other way. We’ll see…

Sasha Thompson (Felisha Cooper) sees Thomas Forrester (Pierson Fodė) having a sweet moment with baby Douglas. Will Thomas talk out loud to his baby son about the tempting offer Caroline Spencer (Linsey Godfrey) made for them to be together? Will Sasha offer to step aside?

Today… Wyatt takes a surprising stance in the war between his mother and his wife. WATCH FULL EPISODE: https://t.co/mW4vSaMhzt pic.twitter.com/NvAXxPwKJw 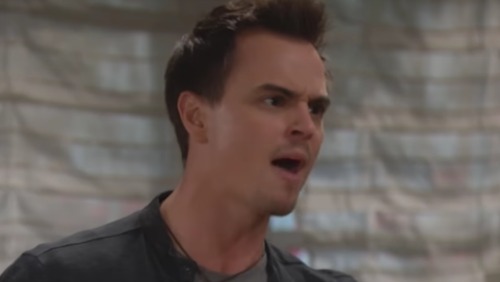 Zende Forrester (Rome Flynn) and Nicole Avant (Reign Edwards) deal with some tension this week as does Bill Spencer (Don Diamont). He’s still waiting to tie the knot with Brooke Logan (Katherine Lang) and isn’t happy that their engagement is lingering.

Also this week, Ridge and Caroline come face to face for the first time since their split. Will Caroline be the voice of reason to Ridge about how badly his lies work out? What do you think B&B fans? Can anyone get Ridge to stop his controlling ways and do what his dad wants?

Share your comments below on these spoilers for B&B episodes the week of Monday, October 10 thru Friday, October 14 and check back with CDL often for all the latest The Bold and The Beautiful spoilers and news.

Next week, @CBSDaytime celebrates “30 Years At Number 1” with special shows and all your favorite stars! #1For30 #TeamDaytime